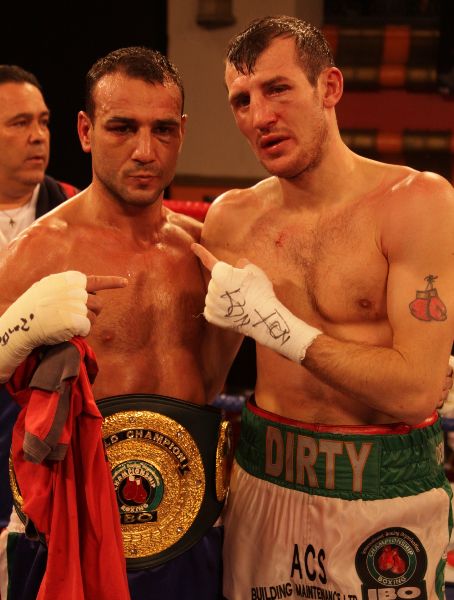 Derry’s Italian job ends in round seven in Liverpool

Chris MaylettJanuary 23, 2012
Fight ReportsLATEST BOXING NEWS0 Comments7 min read
Derry Mathews failed in his attempt to win the vacant IBO lightweight title, when he was stopped in the seventh round by Italian Emiliano Marsili at Olympia in Liverpool on Friday night.
Mathews found the 35 year old from Lazio, just too strong in a fight he started well, but it just slipped away from him, as Marsili’s determination and strength overwhelmed the Liverpudlian in the end.

Derry’s loud fans had crammed the Olympia, and you sensed the anticipation and excitement amongst the crowd who awaited the main event.

It was a packed undercard, with some good fights to wet the appetite; and with 60+ balaclavad Marsili fans from Lazio making themselves heard, if not acquainted with some of the indigenous – you could have cut the atmosphere with a knife!
When the time had come and both entered the ring, a big fight night was sensed, the bright ring lights bounced off there greased torsos and the MC was nearly drowned out with chants of ‘Derry, Derry’ – Derry was pumped and with final instructions from coach Oliver Harrison, Derry set out to claim the belt on offer, also knowing a win could setup a potential big fight down the line.
The fight started off a bit cat and mouse with neither taking the fight to the other, they circled and paw, looking for the spaces and wary of what the others offence. Marsili was bouncing on his toes, and constantly moving, proving an hard target to hit. And then the lights went out! – No it wasn’t a knockdown! – The ring spotlights, seemingly so bright had blow a fuse, or had needed another ten bob putting in the slot. Whatever it was, action was quickly resumed and the round ended as it had begun, but Derry looked comfortable behind his jab.

Marsili, began to find a chink in Derry’s armoury and his southpaw left cross found its target and knocked the head back of the local man. Mathews had not settled into a rhythm and was being beaten to the punch by the Italian. Another left hand from Marsili broke the guard and Derry came away with a bloodied and broken nose. Mathews knows he is in a fight now, with someone who knows his way around a ring, and isn’t unbeaten for nothing!
The proud Scouser beats his chest and roars in defiance at his opponent, but as the bell sounds, its Marsili who goes back to his corner with a smile and a wave to the crowd.

Derry started to use his jab in round three, but couldn’t keep Marsili off for long and inside he was proving hard to handle, with both looking for the advantage, it got messy at times and heads started to bang together, with the referee breaking them up. It was still there for Mathews, if he could summon something to halt the hard Italian, but he was beginning to mark up bad and showing the battle bruises.

The right hand of Mathews was starting to bring him success and when he turned it into an uppercut, it was a useful weapon with which to counter his southpaw foe; And coming to the midway point was starting to really hot up, with both biting hard on the gumsheild; they fought for supremacy.
Derry hurt Marsili in the fourth and backed him to the ropes, he jumped on him, but Marsili came back from it to then back Mathews up. Derry’s right hands were successful again in the fifth, but he was looking tired and finding hard to breath it seemed out of his busted nose.

Round six which proved to be the penultimate session of this bloody battle, as well as a candidate for round of the year.

A big right hand down the pipe from Derry had hurt Marsili who staggered back to the ropes. Piling in the punches, Mathews smelled the victory and went for it. Marsili grabbed the home fighter and hung on to clear his head, as the referee clawed them apart. Marsili retreated from the clinch and Mathews backed him up again and went for it with everything he had left in the tank.
The heads bashed together again, it was hard going. – But Marsili had weathered the storm and now began to walk Mathews back. Trapped in his own corner and visibly hurt, he covered up, as Marsili unloaded, left and right hooks, finishing off with five right uppercuts and a left hook to the body, dropping Mathews!

He took an eight count before firing back bravely, but fell over with the momentum of his shot, and a push from Marsili. Dirty Derry now looked to have nothing left and the bell to end what had been a classic small hall show round, couldn’t have come sooner for him.

At the start of round seven, with Mathews looking weary and referee Howard Foster looking for an excuse to step in, he got it when two hard rights caught Derry flush and the official stepped in to end the fight and Derry’s hopes.
Marsili proved an hard nut to break and Mathews dug deep and did his best, and was heard to proclaim going back to his dressing room, ‘What an hard ******* he was’ – there were no complaints from the straight up Derry, he knew the better man had won on the night.
And Marsili deserved his win, coming to take on Derry Mathews on his doorstep, was no mean feat and proved himself a worthy holder of the strap on offer.
Jane Couch was on hand to capture the behind the scenes footage of Derry backstage getting his eye stitched up by the doctor and giving a frank account of the fight. If you haven’t watched the video interview yet, it is at the top of this post.
If Derry decides to carry on in boxing, bearing in mind he has already retired from the game. Boxing will never be tired of a ‘Dirty Derry Mathews fight’ you know what you are going to get with him, a good show! – There will always be fights at domestic level for him and he is still the current English lightweight champion. So a defence of his domestic belt looks likely to be the option, should he carry on.