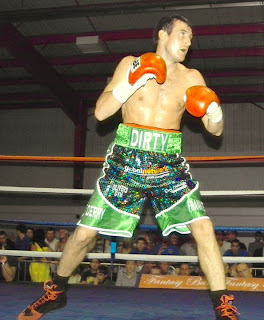 The year is 2006, Liverpool’s Derry Mathews has notched up 14 wins and storms into the new year with a 6th round win over Steve Chinnock and claims the vacant BBBofC English featherweight title.
.
Next, in his first world title fight, the undefeated prospect then met another unbeaten fighter and current EBU Super Featherweight title holder Stephen Foster.
.
Mathews boxed magnificently to a unanimous decision and became WBU champion of the world- an honour held by past champions George Foreman, Ricky Hatton and James Toney, to name a few.
.
After two successful defences, unfortunately in 2008, ‘Dirty’ Derry came up short too Mongolian Choi Tseveenpurev and lost by 5th round KO. A comeback win months later against John Gicharu was overshadowed by a string of three knockout losses- one to Britain’s current number one Martin Lindsay. In disappointment, but not in shame, Mathews retired in 2009.
.
Now, the Liverpool brawler has made a comeback in the Lightweight division with two wins this year, out-pointing his opponent on both outings. UKCBoxing.blogspot.com has an exclusive interview with the 27 year old on his future plans.
.
First of all, congratulations on the comeback, we’ve seen you notch up two wins already. There’s a few good domestic Lightweights like Alex Arthur, Kevin Mitchell and Gary Buckland to name a few, when do you think you’ll be ready to fight these calibre of fighters again?
.
Mathews: Yeah, I believe I’ll be the best out there, well that’s my aim. I put everything into training and will be ready to fight them guys in the new year. John Watson is fighting Rees for British Title, so if he wins, that Liverpool derby would be good for the city.
.
After losing 3 fights in a row before you retired, did you ever doubt you would box again? And what was it that made you want to come back?
.
Mathews: I finally thought that was it, I walked away from the game a proud man, I’d done my family proud and my kids. I started coaching kids, I’ve opened a boxing academy called ‘Derry Mathews Boxing and Fitness Academy’ all over Liverpool. Me and my partners have 8 of them, working with all sorts of kids, just giving them something back, because boxing has been good to me. I fell back in love with the sport due to these kids and seeing them progress.
.
You’ve done the people of Liverpool proud becoming a world title holder, do you think you’ll reach them heights again?
.
Mathews: I know I’ll reach them heights again, I have a great team behind me and have got a top coach. It’s just down to me now to produce the class I have .
.
Finally, lightweight contender, John Murray has got a lot of recognition this year after a string of good wins…Do you think he can win a world title against the likes of Katsidis, Marquez etc?
.
Mathews: I do, I think John is a warrior he’s a real workhorse and loves a good tear up, so I do think he can defiantly win one and I wish him luck in doing so.
.
Can Mathews emulate his previous success and go even further in his latest boxing venture? Lets hope so, good luck to Derry in the very healthy Lightweight division.
.
By Sean Pollock www.ukcboxing.blogspot.com