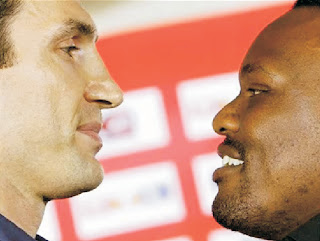 Dereck Chisora came face to face with World heavyweight champion Wladimir Klitschko this week in Manhiem Germany at the press conference to announce the British heavyweight champions challenge for the Ukrainian’s IBF, IBO and WBO titles on the 11th December.
.
.
Chisora, 26, beat Sam Sexton in September to add the Commonwealth heavyweight title to his British crown and is as surprised as anyone that he got the call to fight for heavyweight titles.
.
“I knew that my win against Sexton would lift me in the ranking but this is a surprise,” said Chisora.
.
Klitschko, 34, has a record of 55 wins and three losses, while Chisora has won all of his 14 fights, but as far less ring experience compared to the champion.
.
Klitschko’s older brother Vitali who defended his WBC crown against American Shannon Briggs on Saturday, winning a brutally one sided 12 rounds points decision, could be Chisoras next fight, should Dell Boy achieve a shock victory on par with Leon Spinks’ shock win over Muhammad Ali to win the world title as a 12 fight novice.
.
.
So in the next couple of month’s we will have three British heavyweights contesting the various titles of the heavyweight division. The WBA belt is held by David Haye, who will defend it for the second time against fellow Londoner Audley Harrison in Manchester on the 13th November.
.
The happy go lucky Chisora accepts that he is a big underdog for the fight, Klitschko is unbeaten in six years. But feels he will win and made the champion know it in an heated exchange of words at the press conference in Germany and after the fight between Vitali Klitschko and Shannon Briggs last Saturday.
.
“I’ve worked hard to get where I am so quickly,” he said. “I like to fight the best because I’m in the fighting game. I’m looking to entertain, I don’t want to be fighting bums.
.
“If you’re not fighting the best, you’re short changing yourself. If I’m gonna get beat and so far I haven’t, I’d want to get beaten by the best.”
.
Chisora is confident in his abilities and believes he will cause the upset that will rock heavyweight boxing to its roots. The Londoner had a warning for the Ukrainian champion when he compared himself to some of his favorite heavyweight champions of the past.
.
“With me, it’s take a bit of Mike Tyson, Muhammad Ali, Larry Holmes, bit of Frank Bruno and Lennox Lewis, mix it all up, man, and then you get me.” said Chisora,” he said.
.
“With Tyson, I take his head movement, with Holmes it’s his jab, with Lennox it’s his one-two – oh God, that was a dangerous combination. From Ali, I have foot movement, from Bruno, the physique.”
.
“Chisora is young, quick and a hard puncher,” stated Wladimir Klitschko.
.
“My coach Emanuel Steward has warned me of his qualities and reminded me of the 1978 defeat of the great Muhammad Ali by the 24-year-old Leon Spinks. I will try not to give Chisora a single chance.”