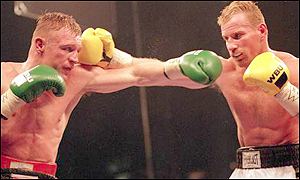 On the 11th March 2000, Liverpool’s Shea Neary defended his WBU light-welterweight title against future hall of famer ‘Irish’ Micky Ward at the Olympia in Kensington, London.

Champion Neary nicknamed ‘The Shamrock Express’ from his own Irish ancestry was ahead on the judges scorecards going into the 8th round in what had been a toe to toe battle and a great fight.
But the Scouser was not able to withstand the heavy body onslaughts that Ward had been giving out and finally succumb to the Irish American, who went on to engrave his name in boxing folklore with a trilogy of amazing fights with Arturo Gatti.
Recently a film of Micky Wards life ‘The Fighter’ was released called the fighter, which depicts the career of Ward and his half brother Dicky Eklund and there struggles out of the ring.
The film rein-acted the fight between Ward and Neary and acquired top reviews from boxing and film fans alike.
In a section of great fights and the mear mention of Micky Ward and Arturo Gatti it would be wrong of us to not show the highlights of the amazing trilogy of fights between the pair, enjoy the highlights below.