Amir Khan ‘I want the winner of Alexander and Bradley next"

British BoxersDecember 17, 2010
Amir KhanLATEST BOXING NEWS1 Comment4 min read
Amir Khan is back home in the UK after his successful second title defense of his WBA light-welterweight crown against Marcos Maidana in Las Vegas, and doing the press rounds is ready to get back in the gym early in 2011 to prepare for his next boxing challenge. 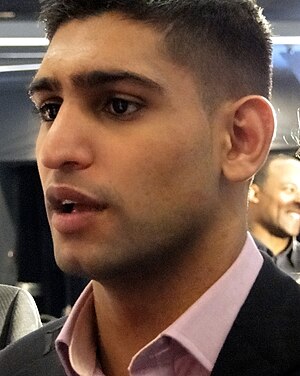 The fight is a high candidate for fight of 2010 and Oscar De La Hoya suggests it could well be the fight of the decade, not sure about that, but for a British boxing fan it was one of the most exciting in the last few years.
Khan became major box office billing over night on the 11th December in Sin City and America have really took to our down to earth lad from Bolton in Manchester, while he went some way to silence the knockers who have questioned his heart and chin, Khan answered some of them questions on Saturday.
Amir being interviewed by SkySports this afternoon said he had no problem in giving Maidana a rematch should he be required to do so, but points out this time he would learn from his mistakes and handle Maidana in different fashion second time around.
But the main aim for Khan is to fight the winner of the other light-welterweight champions in the division. Devon Alexander and Timothy Bradley who meet on Saturday, January 29, 2011 at the Silverdome in Pontiac, US.
Alexander Bradley Clash at New York Press conference
Alexander against Bradley promises to be a great fight and the winner against Khan next year will be a Hugh event for the undisputed championship of the world at light-welterweight, a fight that if he wins will propel Khan to legendary status, still relatively early in his career and before his 25th birthday.
Another option for Khan is Zab Judah who this week tried to promote his case by saying on his Twitter page “Judah vs Khan I see it now In the UK!!! and that fight isnt a bad bet.
But the ultimate goal and dream of Khan is to lock horns with the fighter largely regarded as the most gifted of pugilists earning a crust in the game now and possibly of all time Floyd Mayweather Jnr. who was the man to knock out our last world light-welterweight star Ricky Hatton.
A fight with ‘Money Mayweather would be an epic chapter in the Khan biography and would cement his place firmly as one of the best British Boxers of all time.
If he was to beat Mayweather then his stock would be off the scale and the only other fighter around to conquer would be friend and training partner of Khan, the joint pound for pound king with Mayweather, Philippine star Manny Pacquaio.
But Khan ruled out ever sharing a ring with the ‘PacMan’ because they are too good of friends to go at it for real, but if the infamous hard sparring sessions between the pair at the Wild Card gym in LA are anything to go by you never know!
By Chris Maylett www.britishboxers.co.uk