David Haye vs Wladimir Klitschko! The on off heavyweight saga took another twist this week and a step nearer to making one, of the only two fights that matter in the heavyweight division.

There is no doubt that the presence of our own undisputed cruiserweight champion, Haye stepping up and winning the WBA crown, made the monopolised heavyweight scene a lot more interesting than it was.

In a unique position the Klitschko brothers hold all but one  of the heavyweight title, Hayes WBA! and with no possibility of the brothers ever facing each other, capable challengers have been few and far between, thus all capable  challenges void.

Haye, then gatecrashed their comfort zone like a noisy ‘cat amongst the pigeons’ catching the Ukrainian siblings cold, with his flamboyant bravado and calls to challenge their dominance,  public challenges and video rows, coupled with the initial fight withdraw from Haye, who then sneaked in the back door and snatched Nikolai Valuev’s WBA title in Germany, giving him equal bragging rights in any future negotiations.

Haye has become their annoyance a thorn in their side that needs to be silenced, he is also  now their prize fight, the only real super fight they will get in their era and the chance to make serious one off fight money and stamp their own legacy on the heavyweight lineage.

Haye is the plot in the script they only could have wished would appear, and why a fight between the British hero will happen before their time is out and Haye retires next year,, has he says he will.

Shrewd Boxing Business men! the Klitschkos and Haye regard  themselves as and are pioneers of the new self managed and promoted modern day boxer and 50% of a lot of money makes a career best payday and great business and perfect boxing sense.

Adam Booth has claimed that both camps have agreed to take the 50-50 split which has been on the table since initial talks broke down.

Booth had previously rejected talk of an equal split because WBA heavyweight king Haye brought more to the table through UK television revenue.

However, Booth now says all stumbling blocks have been removed for a heavyweight unification bout.

“We’ve sorted out all the old problems and disagreements,” said Booth.

Klitschko’s manager Bernd Boente was unavailable for comment, although Booth told the Guardian on Tuesday that Boente had already been offered the terms but was refusing to sign off on a deal.

Booth added: “We are now perfectly positioned to get together and make this fight with Wladimir Klitschko and are ready to sign the deal both Bernd Boente and I discussed.

“Despite the fact we know we bring more UK television money to the table, David and I are happy to split the entire pot 50-50 and grant Wladimir the deal he has wanted since day one.

“We have offered them 50-50 on everything – just as they requested – and now see no reason why this tremendous fight can’t happen. The path is clear.”

Haye, 30, added: “We have now ticked every box they have asked us to tick and I just hope Wladimir is as eager to fight as he tells everyone he is.

“We have removed every possible excuse and have shown we are serious about making this fight become a reality. I’ll smoke him out if I have to.

“I only pray Wladimir is as serious as we are, because this fight needs to happen for the good of the sport.” 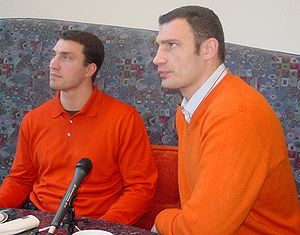 Meanwhile Vitali Klitschko said his brother, Wladimir, who between them hold three of the world heavyweight belts, is ready to agree to the purse split and sign to fight  Haye in the biggest heavyweight meeting since Lennox Lewis defeated Vitali, in 2003.
A fight between the 30-year-old Londoner and one of the Ukrainians has been in the offing for a long time, with Haye having already withdrawn from a 2009 bout with Wladimir due to a back problem. But, after Wladimir’s fight with Dereck Chisora was called off 10 days ago owing to injury, Vitali says that his sibling is ready to do business with Haye.
“Wladimir is ready to fight Haye. It is always Haye who comes up with the excuses,” the elder Klitschko told the Golzka newspaper. “Last year we had a signed contract and that wasn’t enough. Haye has the last remaining title that doesn’t belong to a Klitschko. There are no problems with us to make a fight with Haye.”
Vitali had said last month that he wanted to fight Haye first, as he believed his brother would “kill” the Bermondsey man. Haye has made no secret of his desire to unify the division by his 31st birthday in October 2011 – when he plans to retire from the sport.