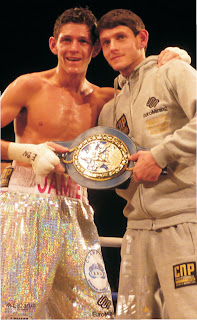 Jamie McDonnell held onto his European bantamweight title with a close majority points decision over tough Belgian challenger Stephane Jamoye in his home town of Doncaster on Saturday night.
After a positive start to the fight, McDonnell was wobbled to his glittery boots in round two by a big right hand from the confident challenger. He was also deducted a point in the eleventh round for constant misuse of the head and shoulder, which he had been warned for throughout the fight.
But the champion had done enough in-between that, to earn a deserved win, with judges scores reading 115-113, 114-113, 114-114 in a night of high drama at the Dome.
In the second defence of the title he earned by beating Jerome Arnould in France last year, McDonnell looked confident going into this fight and boxed very well against a very game and awkward Jamoye, who gave his all and certainly his performance proved his mandatory credentials.
When McDonnell stayed on the outside and used his skills behind his quick jab, he always looked in control. But with his tough Yorkshire grit, he was constantly ready to stand in range with Jamoye and go toe to toe in a slug fest that had the partisan crowd going crazy.
Both boxers deserve a lot of respect for the performances they put in, in this nip and tuck battle of attrition. But McDonnell will hope he can make lighter work of the job in the future.
“It was a really tough fight, I felt that didn’t really get going, I got caught with a couple of good shots and I really had to dig in. McDonnell told Sky Sports afterwards.
“Before I knew it, it was the 11th round, the fight just flew by. I just started using my jab, keeping it longer a little bit, I didn’t feel like I got stuck in the way I can.” he added.

Earlier in the night, former British super-featherweight champion Carl Johanneson made it three wins on the trot since returning to the ring last year with a points win against George Watson.

The Leeds battler will now take on English champion Anthony Crolla on the 26th February, with the winner being in line for a shot at the British title, currently held by Gary Sykes.