Khan McCloskey finally breaks down due to money 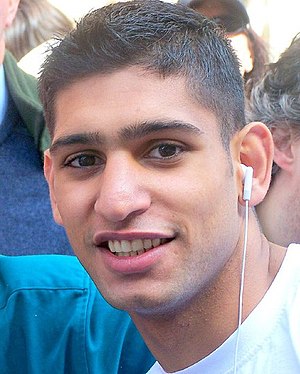 Amir Khan will have to continue his search for a credible challenger to his WBA light-welterweight title at the Manchester MEN Arena on 16 April, after the taught negotiations to fight Paul McCloskey finally broke down today.
It was believed that both camps had agreed to the fight in principle but the money on offer to European and British champion McCloskey was as promoter Barry Hearn put it was “totally derisory” and proved to be the obstacle they couldn’t agree on…. What is happening to boxing??.. But that’s another article!!
Khan (above) had hit back saying that the purse offer on the table for the Belfast man, was way more than he had ever been offered or likely to ever be offered! But it looks like now the second offer Khan came back with, still didn’t cut it with McCloskey and his people.
A statement from Hearn has now pretty much put paid to a meeting between the two best light-welterweights in Britain for the time being, as Hearn looks to go a separate route for McCloskey’s shot at world glory.

The deals placed on the table were an insult to Paul, an undefeated fighter and a European champion,” – said Hearn.

“You have to pay your opponents to step in the ring with you, and pay them fairly,” he added.
The percentage share of ticket sales commission and pay-per-view revenue appear to have been the major sticking points between the two parties.
McCloskey claimed the European belt in November 2009 with a ninth- round stoppage of Daniel Rasilla and defended the title twice last year to take his unbeaten record to 22 fights.
“We have a huge fight lined up for Paul at the King’s Hall in the spring and who knows, down the line he could face Amir as a world champion himself in a 50-50 split fight,” stated Hearn.
Last week, Khan’s father Shah said that an offer had been made to 31-year-old Dungiven fighter McCloskey.
“We have offered him almost three times what he got paid for his last fight and the ball is in their court – it can happen if they agree to the terms.”
Khan has stated his aim of unifying the division this year. He wants to fight the winner of the forthcoming bout between the US fighters Timothy Bradley and Devon Alexander on 29 January.
Related recent articles