British BoxersJanuary 23, 2011
LATEST BOXING NEWS0 Comments2 min read
Regular guest on ‘The Main Event Radio Show’ Emanuel Steward, shared his current thoughts with host Barks, regarding his visit to the UK to do his ‘Boxing Clinc’ at The Hilton Hotel in London. 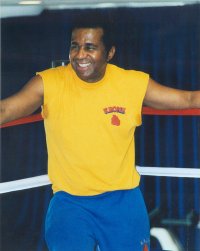 Plus his opinions on the Wladimir Klitschko, David Haye fight breakdown.
Steward also points out that he believes Dereck Chisora is much more of a threat to Klitschko than the UK fans are giving him credit for.
For all that and much more from the legendary boxing trainer play the video above or go to www.maineventboxingshow.co.uk
Some of Manny’s comments from the show…
On Hayes Retirement Plans?
“He’s not gonna to retire! He will be fighting, whether he gonna fight with Klitschko on July 2nd as a schedule, or he gonna fight Chagaev or he gonna do whatever… he gonna be fighting!”
On Dereck Chisora, The British heavyweight champion and Wladimirs next opponent?
“I have much respect for Dereck Chisora, I think he is going to be the liveliest and most competitive Wladimir has fought in many years. I think Chisora is a much, much better fighter than you guys in the UK are giving him credit for.”
Wladimir Klitschko vs David Haye?
“I’m not upset with him, I’m not upset with David, whatever happens happens if they fight one day fine, if they don’t we’ll just have to accept that.”
For more information about Emanuel Steward’s Boxing Clinic’s visit:
www.emanuelstewardonline.com
www.maineventboxingshow.co.uk