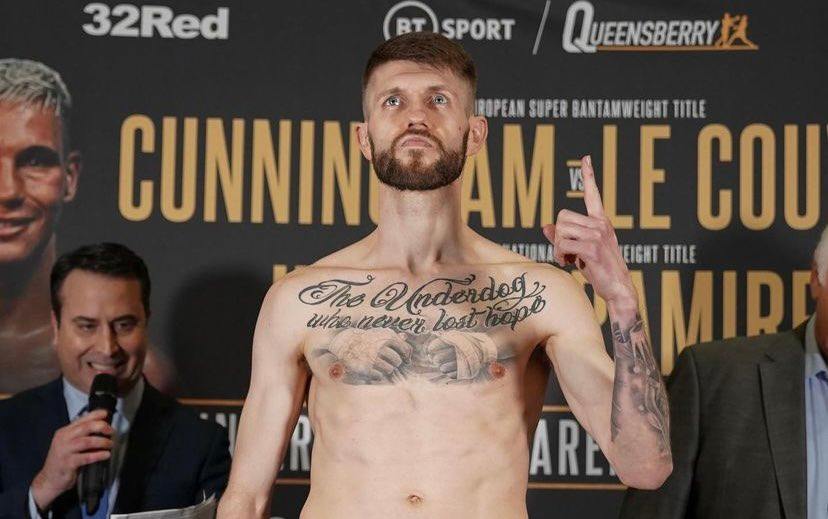 Cunningham seeks to continue momentum against Le Couviour in Telford

One of the stand-out British fighters of 2021 Jason Cunningham (30-6-0) returns to the ring for the first time in 2022 against undefeated Frenchman Terry Le Couviour (16-0-0) at the Telford International Centre this Saturday, live on BT Sport. Cunningham’s European super-bantamweight title will be on the line as he seeks his second successful defence of the strap, first becoming champion with a surprise victory over decorated amateur Gamal Yafai back in May of last year. ‘The Iceman’ raised more eyebrows five months later with a unanimous points victory over Brad Foster, adding the British and Commonwealth titles to his collection in the process.

Fast-forward to April 2022 and the sky is the limit for Cunningham, a man who just two fights ago with facing opponents with lop-sided records at the Doncaster Dome, his career appearing to be heading nowhere before he snatched at an opportunity to fight Yafai with both hands. Le Couviour meanwhile boasts an unblemished record, winning all sixteen of his professional outings so far though only scoring two via stoppage, but has not yet shared the ring with any opponent of note. Exactly what the Frenchman will offer on Saturday night is difficult to predict, but one thing that is for sure is that after working so hard to get into the position he is in right now, Jason Cunningham will not be wanting to let go of his titles anytime soon.

The undercard sees popular Stoke middleweight Nathan Heaney (14-0-0) return over ten rounds against Diego Ramirez (24-6-1) of Argentina. Heaney always carries a rapturous crowd wherever he fights, and will no doubt be looking to impress again with another strong performance against the South American. Liverpool’s Andrew Cain (8-0-0) is also scheduled to go ten rounds in the super-bantamweight division, facing off against another Argentine in Pablo Ariel Gomez (15-10-2), with a form of the WBC championship on the line.

Further down the card, Worcester’s welterweight prospect Owen Cooper (5-0-0) walks for the sixth time as a professional in a six-round contest against Richard Helm (1-3-1) of Rochdale. Cooper signed with Frank Warren and Queensberry last April, and has spoken about his long dream of fighting at Sixways Stadium, the home of his city’s rugby team Worcester Warriors. Ethan James (7-0-0) also runs out at super-lightweight in an eight-round contest, Ben Fields (10-11-2) in the opposing corner. Yet another super-bantamweight is slated to fight in Telford, with undefeated prospect Brad Strand (6-0-0) returning for the first time since November over six rounds, taking on Tanzania’s Ally Mwerangi (11-1-0).