British BoxersMarch 19, 2011
LATEST BOXING NEWS1 Comment7 min read
Jon Kays will have the advantage of not quite an home town crowd, but the Manchester boxer will have the Northern venue packed with his fans tonight when he challenges Norfolk’s Liam Walsh for his Commonwealth super-featherweight title at the Robin Park Arena in Wigan.
‘2 Smokes’ Kays last fought in September against Welshman Dai Davies, winning via a 7th round KO to claim the vacant International Masters super-featherweight title.
Kays (14-1, 4KO’s) had been lined up to fight British champion Gary Sykes for his Lonsdale belt in a voluntary challenge. So he should be in the best possibly shape, having trained for the 12 round distance for many weeks prior to getting this commonwealth title chance against Walsh, when Sykes ended up defending against Carl Johanneson instead.

The unbeaten Walsh, (10-0, 7KO’s) one of the three fighting brothers from the coastal fishing town of Cromer, is expected to be taking 200 of his followers up to the birth place of Northern Soul.

Walsh (left) the highly rated prospect will be the toughest test of Kays career and vice versa, in what should be a very interesting fight of two pugilists at similar stages of there fledgling profession’s and should offer us a good fight with a few twists along the way.
But the challenger believes it isnt just the home crowd where his advantages lie and says he is going in prepared to fight Walsh centre ring, in a strategy he feels will see him claim Walsh’s commonwealth strap.
“I would never have taken this fight if I didn’t truly believe I could win.” said Kays. 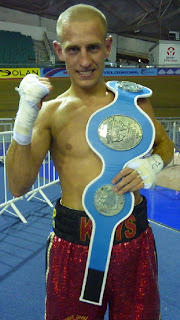 “Training has gone really well, and although a lot of people think I’m up against it, I’m 100% confident that I’m going to come through and win the belt.

“If he wants to stand in the centre of the ring and fight it out, I’m ready, I’ve got total faith in my strategy and I feel I will wear him down in the later rounds.” added a confident Kays.
And even though Kays (right) is the challenger tonight, he also sees himself as the one with the edge in experience as an amateur and his exposure to better opponents and will not let the exposure of the Live Sky Sports cameras put him off in anyway.
“I had a very good career as an amateur, winning fifty out of seventy-five fights against some of the top fighters in the country at the time and I feel that I can use such a background to my advantage on Saturday night.” Kays told Jamie Albrecht BritishBoxers correspondent.
“A lot of people will think that because this is only my second time on Sky Sports that I might freeze in front of the cameras, but what a lot of people don’t realise is that I have fought most of my career in front of the Channel M cameras coming through, so the spotlight is no big problem for me”. (Channel M was a local channel covering Manchester boxers)
Walsh 24, won the title beating Maxwell Awuku in October last year, in his toughest fight to date. Awuku took him the distance in his first 12 round fight and gave Walsh plenty of problems that he was impressively able to solve to eventually out-smart the Ghanaian to take a unanimous decision.
“I learnt more in that title fight than I had done in my nine previous ones,” said Walsh at the press conference..
“It’s definitely made me into a much better fight, and my confidence is really buzzing now.
“I can’t wait for this fight against Kays. I’ll silence the crowd pretty quickly because I really can’t see how he can beat me.
Walsh also adds that he has no problem defending his belt in front of a partisan crowd up in the North and says the booing and experience will stand him in good stead in his career and he fully expects to come out of the lion’s den with his belt firmly around his waist.
“When I first heard I was fighting away in Wigan I thought ‘I’m going to get booed and water thrown at me.” Walsh told BBC Radio Norfolk.
“But it’ll be a different environment, I’ve never been booed, it’ll be nice”.
He added: “It’ll add another feather to my cap, I’ll have covered some more ground and learnt something.”
“I’m not sure I’ll get out-cheered, I think a hundred of my local fans will out-cheer 500 of his, they’re so loud.”
Walsh, says he has watched Kays on video and believes the Ashton man’s style will make for a cracking fight admitted he was not sure how Kays would approach the fight.
“I had one DVD on him…on one of the fights he’s a clever neat boxer, and the other time he takes the centre of the ring and he’s aggressive,” he said.
“If he comes out being aggressive, it’s going to be a cracking fight because I’m not giving any ground to him.”
Undercard from Wigan’s Robin Park Arena.
The evening also sees the return of the undefeated Bolton welter-weight Rick Godding meets Wales’ Barrie Jones in an eight rounder.
Liverpool VIP starlets Stephen Harkin, Stephen Jennings, Kevin Satchell and Ryan Farrag will also feature along with debutant’s DT Price, James Burke and Mark Evans.
Leyland’s Chris Johnson will also see action for the first time since beating William Warburton for the Central Area Welterweight crown and local Wigan Heavyweight Rob Beech completes the 11 fight bill.
TICKETS FOR THE “ROBIN PARK WARRIORS” BILL ARE PRICED AT £30.00 GENERAL ADMISSION AND £50.00 RINGSIDE. DOORS OPEN: 5.30 PM. BOXING COMMENCES AT 6.00PM
Can supporters please note this event will now start at 6.00pm with doors opening at 5.30pm and not the 7.00pm as printed on the tickets. This is due to the event changing into a SKY show and to ensure that all the 11 fights happen.
.