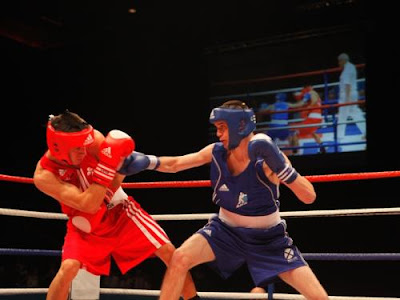 This weekend sees the last of the current season’s Scottish Amateur Boxing Championships with the Intermediate Championships at the new World Class Ravenscraig Regional Sports Facility in Motherwell.
It has been a pivotal year for the sport in Scotland. A restructuring of its governing body Amateur Boxing Scotland has resulted in a major up-scaling in the promotion and development of boxing in the country.
Coming on the back of Gold, Silver and Bronze medal success at last year’s Commonwealth Games in Delhi; 2011 has seen a number of Scottish boxers emerge as potential stars, with four being victorious at this year’s Scottish Senior Championships.
In addition, Scotland’s boxers are now receiving wider recognition with two of the Commonwealth squad, Josh Taylor and Aston Brown, currently included in the GB Development Squad ahead of next year’s Olympics in London.
Through Amateur Boxing Scotland’s focus on grass-roots, a Development Commission for Schoolboy and Junior boxers and an Elite programme for youth and seniors, along with an increased focus on women’s boxing, ABS have taken squads across Europe this year, competing with athletes from top boxing nations.
With a number of boxers from across the country having been invited to be included in these squads and now making real steps in their own development, this weekend will represent a big step the progression of athletes involved to gain some recognition too.
The Intermediate Championships encompass boxers from all categories; Schoolboy/Junior, Youths, Seniors and Women and the competition is designed for those who have competed in between 6 and 14 bouts. In other words, these are the boxers on the cusp of success.
Athletes with aspirations to join the likes of Josh Taylor and Aston Brown at the top of the amateur game. The Olympics may be a bridge too far for these ambitious boxers, but with the Commonwealth Games set to land on our door step in 2014, this presents a massive motivation for the boys, girls, men and women involved at Ravenscraig this weekend.
Athletes representing clubs from all over of Scotland will be hoping to join those already tasting international experience on the road to medal success at Glasgow 2014. With the Championships being hosted at the brand new multi-million pound Ravenscraig Venue, a large turn-out is expected and all boxers, coaches and clubs involved will be hoping the noble art provides some top class entertainment.
Scottish Amateur Boxing Intermediate Championships
Ravenscraig Regional Sports Facility, Motherwell
Saturday 30th April – Doors Open 11.30am
Tickets Priced £12 Adults £8 Concessions
For more information on British amateur boxing visit www.gbboxing.org.uk