Doyle Ready For Gill Challenge: “I’ve Paid My Dues And Done It The Hard Way.” 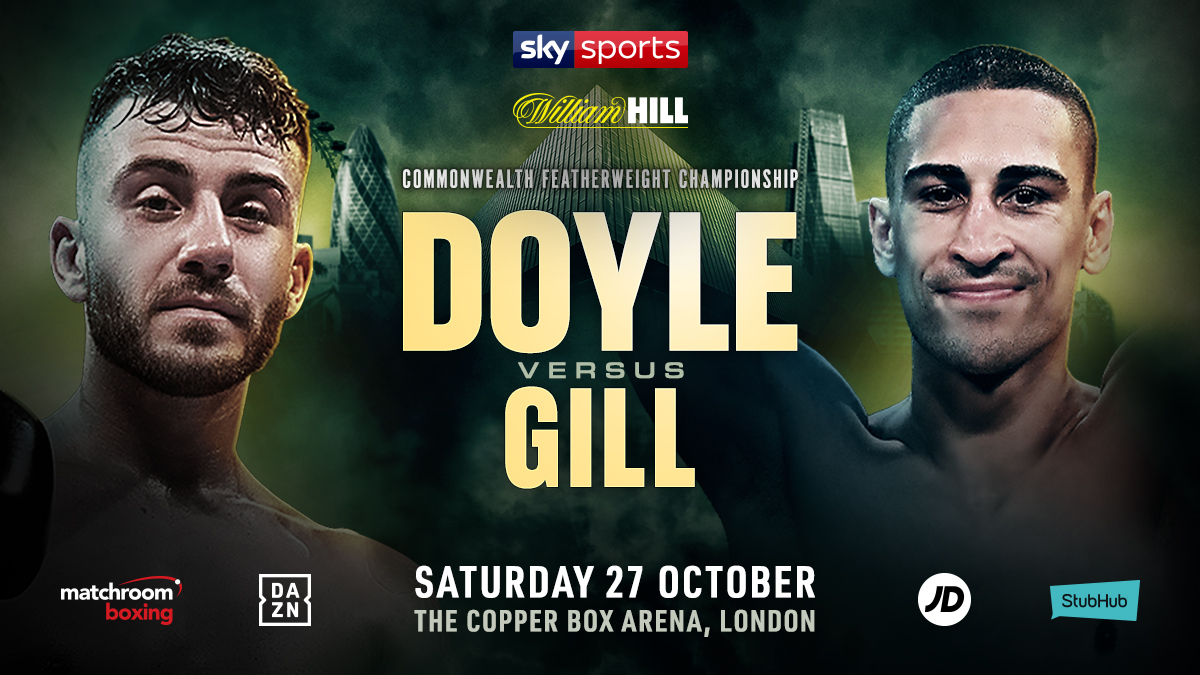 “I DIDN’T HAVE A WAR WITH BELLOTTI JUST TO GIVE THE TITLE AWAY.”

Ryan Doyle, 27, makes the first defence of his Commonwealth title against Cambridgeshire’s Jordan Gill on Saturday October 27, live on Sky Sports in the UK and DAZN in the US.

The Manchester man hit the big time after his shock win over Reece Bellotti in June, stopping the rising talent in five epic rounds, and is wasting no time as he looks to build on his career best win by jumping straight back in against the undefeated Dave Coldwell-trained starlet.

“I’ve had good preparation for this fight, we had eight weeks notice and everything has gone to plan,” said Doyle. “I’ve had World class sparring with WBA Bantamweight World Champion Ryan Burnett and former World title challenger Charlie Edwards.

“We’ve put everything into this camp and I’ll be in the best shape of my career on October 27th. Knocking work on the head has allowed me to train full-time and everyone will see the difference that makes on fight night.

“I’ve watched the Bellotti fight back, it was a good performance by myself and I’m happy with it, there’s one or two things that we have tightened up on. I need to improve with every fight. “

Gill trains alongside the likes of Tony Bellew and Jamie McDonnell at Coldwell’s gym in Rotherham and is highly-regarded by his gym mates, but Doyle believes his experience and heart will show on the night.

“I don’t know a massive amount about Jordan but what I do know is he’s technically very good. He’s not put a foot wrong as a professional, he’s done everything right so far. However, I don’t believe he’s been in the same fights that I have, I’m battle hardened, I’ve been in the wars. It’s Jordan’s time now to have a little go but I didn’t have a war with Bellotti just to give the title away.

“I understand that Jordan has got a good stable behind him, a good trainer, he’s definitely a stiff test for me. I’ve got to be 100% on my game to beat him. Like I said, I haven’t been in these gruelling fights just to give it all away.

“There’s no bad blood whatsoever, we’re both professional athletes and you conduct yourself in the right way, but come fight night it will be a different story. I’ve fought hard to keep my career alive and I won’t be surrendering my title without a fight.”

Doyle, a former English Champion, has experienced several setbacks during his six-year career and was even considering retirement before his stunning win over Bellotti.

The Gorton pressure fighter is hoping a big win over Gill will signal the beginning of an exciting new chapter in his career.

“The Featherweight division is one of the best weight divisions in Britain at the moment. Outside of the top four or five fighters, anyone can beat anyone. It’s a real good mix at the minute.

“I would love a crack at the British title next but for now all of my focus is on Jordan Gill, if I don’t beat him then the bigger fights down the line won’t happen.

“At Christmas time I was looking at packing it all in and working full-time. Luckily I got the opportunity to fight Reece and I grabbed it with both hands. I’ve paid my dues, I’ve done it the hard way and now it’s time for my reign.”

Doyle vs. Gill is part of a huge night of action at the Copper Box Arena topped by Islington’s John Ryder taking on undefeated Russian Andrey Sirotkin in a Final Eliminator for the WBA Super-Middleweight World title.