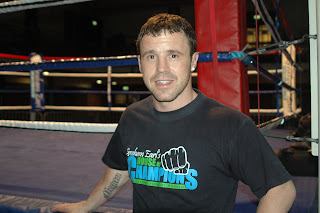 Graham Earl: Official Statement on Michael Katsidis Rematch
Earlier today the internet was buzzing with the news that Earl-Katsidis II is possibly on the cards. The news broke after Michael Katsidis posted on his official website a statement regarding an e.mail to Michael’s manager Brendon Smith from Graham Earl, challenging Michael to a rematch of their 2007 Battle Royale.
With the approach now very much out in the public domain Graham today issued the following statement. “Ever since our last fight together I was promised a rematch and the chance to get my revenge.
Obviously I understand that there were obligations from that fight and he had the opportunities to move on.
He got the win that night. He put me down a few times then I put him down. We were having a war in the fourth and fifth and I believe I won those two rounds and the fight was in the balance at that stage. If the fight had continued I believe I would have won.
Last time it was in my own back yard, this time it looks like it may be in his. I love the challenge and will do the job properly and get the result.
A lot of people are saying that Graham Earl is finished, what they forget is that I fought at such a high level, I was a Championship fighter. I didn’t fight that many four rounders in my career they were mainly ten and twelve round Championship fights.
I recently opened my own gym and started my own promotions business, but I’ve always remained training. The last three months I’ve stepped the training up, I’m pushing myself that bit harder and I intend to go into full training for this fight shortly. I’ll be more than ready.
Most fights these days are not great at all, people are paying good money and not getting the fights they deserve.
Earl-Katsidis II will give fans the kind of fight they want and deserve. It would be a great fight and I believe the public deserve this fight to go ahead. “
Further announcements regarding the the proposed Earl-Katsidis II are expected from both Michael Katsidis and Graham Earl in the near future. By Gianluca (Rio) Di Caro
– Watch their epic first fight here