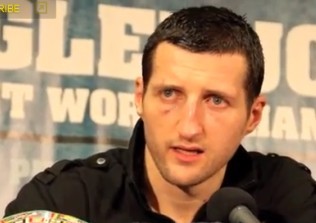 Froch: ‘Groves is Not Ready for Me’

Carl Froch says that if he has to defend his IBF world super-middleweight title against George Groves this year, then he will have no problem beating his British rival, because he claims Groves is not ready to share a ring with him.

Groves has been installed as the mandatory challenger for Froch’s IBF belt and the Cobra will have to defend it against him next or relinquish the belt he took from Lucian Bute in May last year. Froch is also the WBA champion and could go down the road of defending that and letting Groves fight for the vacant belt, but can you see the Nottingham warrior refusing a fight put to him? He hasn’t in the past.

The only fight that would probably sway his decision and delay a fight with Groves, is if a rematch can be made with Andre Ward, who defeated Froch in 2011.

“There are no definites in boxing. If the fight can be made, and it makes sense for Groves and his manager Adam Booth, then they’ll take the fight and I’ll do what I do and defend against my mandatory. I’ll fight anybody. I’ve proven that over years. I fear no man and I’ll jump in with him.” Froch told the Alan Brazil Sports Breakfast.

“I don’t know if it’s going to happen. Eddie Hearn is talking to him and he’s looking at different options. It can get a bit confusing. The fight may or may not happen before Christmas.”

“I’ve got nothing against George Groves, It’s hard for me to have anything against any other fighter. When they talk rubbish it’s just to build the fight up and make some money because it’s business.

“I’m too long in the tooth for that. I’ve been a pro for 11 years, a four times world champion, I’ve had ten world title fights. If someone has something bad to say about me it just makes me laugh. I do my talking with my fists.