Jamie McDonnell and Stuart Hall primed to clash this year 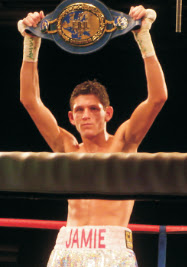 European bantamweight champion Jamie McDonnell is being lined up to face British champion Stuart Hall later this year, but first must defend his commonwealth belt against tricky Kenyan Nick Otieno at the Hillsborough Leisure Centre in Sheffield on Saturday May 28.
McDonnell 25, from Doncaster (left) is under the same Frank Maloney promotional banner as Hall 31, and Maloney is keen to make the fight and is pleased that this year as seen the best British boxers facing each other and believes McDonnell against Hall can be added to that list.
“Right now in Britain the best domestic fighters are facing each other and that trend needs to continue.” said Maloney.
“We’ve had James DeGale and Georges Groves, in July Kevin Mitchell takes on John Murray and Jamie against Stuey can stand alongside them. Right now in Britain the best domestic fighters are facing each other and that trend needs to continue.
“Jamie didn’t seem so keen recently believing he has passed Stuey, but I am sure he and his manager Dennis Hobson can see that is the biggest payday until moves for a world title. There is no reason why it cannot happen in September or October at the very latest.” he added.
Maloney, although confident McDonnell should win his fight against Otieno this weekend, he believes that the Doncaster man will have his work cut out for him against the quality Kenyan, who has never been stopped in in 27 fights..
“All of Nick’s (Otieno) defeats have been to men with world title aspirations and last time out he went the distance with a top class Thai fighter, Thangtong Kiattaweesuk.
“I don’t doubt for one second that Jamie will give a master class, but a stoppage win would be a special result.” Maloney added.
Fight bill / undercard for Hillsborough Leisure Centre in Sheffield.
For ticket information call 0114 243 4443.