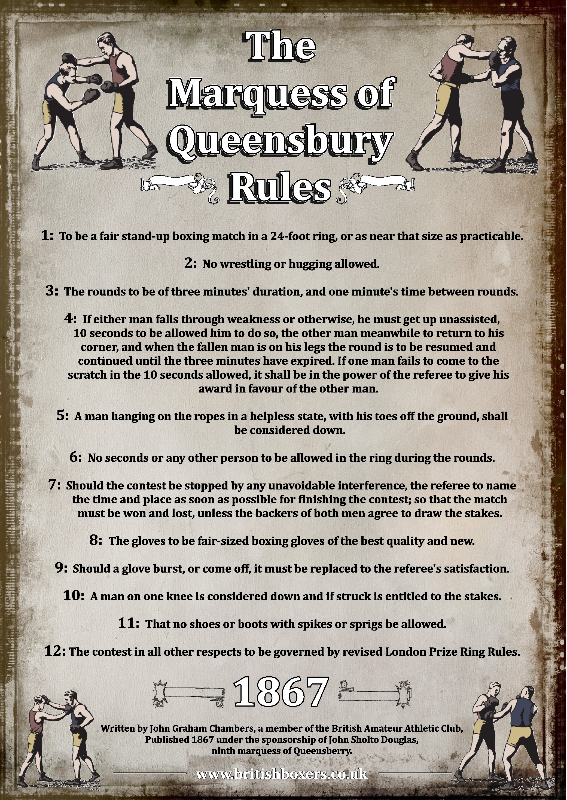 The Marquess of Queensbury Rules 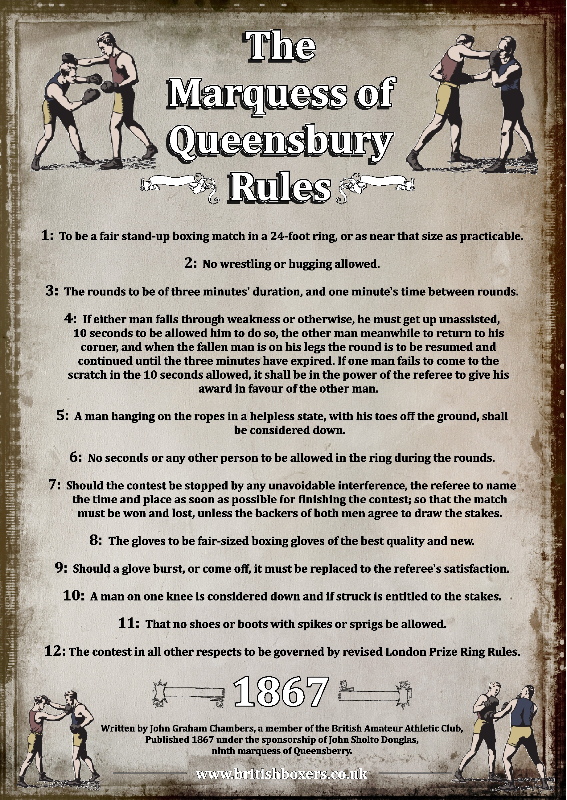 plural noun Marquis of Queens·ber·ry rules \-ˈkwēnz|ˌber|ē- -b(ə)r|, |i-\
Definition of MARQUESS OF QUEENSBERRY RULES
: a code of fair play presumed to apply in any fight <recognize no Marquis of Queensberry rules by which moral decorum should regulate and govern their differences — Lucius Garvin>

Marquess of Queensberry rules, code of rules that most directly influenced modern boxing. Written by John Graham Chambers, a member of the British Amateur Athletic Club, the rules were first published in 1867 under the sponsorship of John Sholto Douglas, ninth Marquess of Queensberry, from whom they take their name. The rules are as follows:

The Marquess of Queensbury Rules

1:  To be a fair stand-up boxing match in a 24-foot ring, or as near that size as practicable.

2:  No wrestling or hugging allowed.

3:  The rounds to be of three minutes’ duration, and one minute’s time between rounds.

4:  If either man falls through weakness or otherwise, he must get up unassisted, 10 seconds to be allowed him to do so, the other man meanwhile to return to his corner, and when the fallen man is on his legs the round is to be resumed and continued until the three minutes have expired. If one man fails to come to the scratch in the 10 seconds allowed, it shall be in the power of the referee to give his award in favour of the other man.

5:  A man hanging on the ropes in a helpless state, with his toes off the ground, shall be considered down.

6:  No seconds or any other person to be allowed in the ring during the rounds.

7:  Should the contest be stopped by any unavoidable interference, the referee to name the time and place as soon as possible for finishing the contest; so that the match must be won and lost, unless the backers of both men agree to draw the stakes.

8:  The gloves to be fair-sized boxing gloves of the best quality and new.

9:  Should a glove burst, or come off, it must be replaced to the referee’s satisfaction.

10: A man on one knee is considered down and if struck is entitled to the stakes.

11: That no shoes or boots with spikes or sprigs be allowed.

12: The contest in all other respects to be governed by revised London Prize Ring Rules.