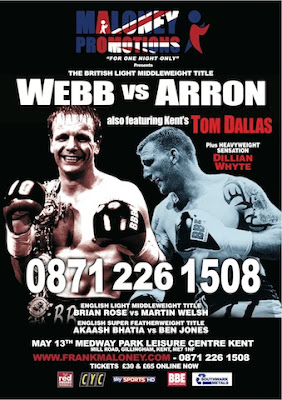 Sam Webb, defends his British light-middleweight title against Manchester’s Prince Arron, when big time boxing returns to the Medway Park Sports Centre in Gillingham Kent tonight, May 13th.
Webb (17-1, 5 KO’s) faces a tough challenge against Arron, who is a Prizefighter champion and has lost just three times in 24 fights, but will be determined to make a second successful defence of his 11st domestic crown and move a step closer to securing the Lonsdale Belt outright.
Last time out, in October 2010, in a terrific display of boxing, 30 year old Webb turned the tables on hard-hitting Martin Concepcion by knocking out the puncher from Leicester in the eleventh round of an absorbing and entertaining scrap. While Arron, (20-3-1, 3KO’s) who will tower over Webb during their contest and who actually has more wins on his record than the champion, is on a 3½ year, 11 fight undefeated run.
Webb vs. Arron promises to be a fitting main bout with which to stage the return of championship boxing to the Garden of England.
In the chief supporting bout another local fighter, Swanley’s Martin Welsh, will be looking to upset the odds by taking the English light-middleweight crown from current champ Brian ‘The Lion’ Rose.
Welsh is unbeaten in his nine fight career to date but faces a tough test in Blackpool’s Rose, (16-1-1, 4KO’s), who will be making the first defence of the title he won in November last year. Welsh, who will be buoyed by the local support, will take heart from the fact that Rose can be beaten, evidenced by Brian’s KO loss to Birmingham’s Max Maxwell in May 2010.
Also on the bill will be Kent’s undefeated heavyweight hope Tom Dallas who will be looking to follow in the recent footsteps of regular sparring partner, Liverpool’s David Price, by beating his first American opponent.
In a sure-fire learning fight, Dallas will face the tricky Zack Page, a (21-34-2 7KO) veteran who has taken the likes of Michael Sprott and Tyson Fury the distance previously.
If Tom can do what Sprott and Fury failed to do and finish Page inside the distance then he will be making a heavyweight statement.
Page (21-34, 2KO’s)) has a reputation as one of the most durable fighters on the heavyweight circuit and in December lasted the eight round distance against Manchester prospect Tyson Fury.
Promoter Frank Maloney said: “I am not even bothered about Tyson because I look after the best two heavyweight prospects in Britain, David Price and Tom.
“They are the future of the division and like Pricey proved last week when he knocked out Raphael Butler, Tom will be looking to make a statement.
“Some of the sparring between Tom and Pricey is better than most heavyweight fights but they would only fight each other if something special was on the line.”
Page, 37, has been stopped just three times and last year shocked Mike Tyson conqueror, Kevin McBride – outpointing the Irishman over eight rounds.
Full fight card as follows:
12×3 British Light Middleweight Title
Sam Webb v Prince Arron
10×3 English Light Middleweight Title
Brian Rose v Martin Welsh
10×3 English Super Featherweight Title
Akaash Bhatia v Ben Jones
8×3 Heavyweight
Tom Dallas v Zack Page
6×3 Cruiserweight
Menay Edwards v John Anthony
6×3 Middleweight
Tony Hill v Paul Samuels
6×3 Flyweight
James Coglan v TBA
4×3 Heavyweight
Dillian Whyte v TBA
4×3 Featherweight
Lewis Pettitt v Chuck Jones
4×3 Flyweight
Brad Watson v Anwar Alfadli
For ticket information call 0871 226 1508 or visit www.frankmaloney.com