David Haye vs Wladimir Klitschko ‘Face Off’ around the table

The heavyweight unification fight between Britain’s David Haye and Ukranian Wladimir Klitschko on July 2 is but two weeks away, when the two best heavyweights in the world fight for the combined titles
In an heated face to face meeting between the pair on HBO, Max Kellerman was asking the questions and you could cut the tension with a knife. We see Kellerman ask Haye how he will deal with the bigger size of Wladimir in the ring.
Haye hits out at Klitschko saying his previous opponents have all been fat and out of shape and tells says he is far better fighter than anyone the Ukrainian has ever faced
Wladimir fires back and calls Haye a wannabe to his face, a chicken running around and that he better shut up. 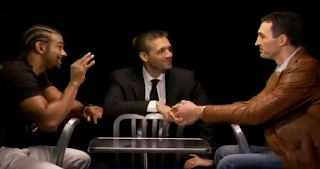 This is indeed the most significant and meaningful heavyweight title unification bout we have had in such a long time and fight fans are eagerly awaiting their July 2 heavyweight mega fight in Hamburg Germany.
This around the table “Face-Off” interview session is a real insight into each fighters mental state, but is hard to read who is fooling who and who will be the one to perform on the night when all the talking is done.
The UK are behind Haye and believe he can unify the heavyweight titles, it will be no mean feat though fighting and beating the experienced long term champion, especially in Germany, the adopted home and base for him and his brother Vitali. But Hayes confidence, will to win and above all punch power and speed could see him become Britain’s first undisputed heavyweight champion since the Lennox Lewis.
“Face-Off” will also be available on the HBO On Demand® service and at www.hbo.com/boxing as well as various other new media platforms that distribute the series.
Can David Haye Beat Klitschko on July 2 ? – Tell us what you think below!