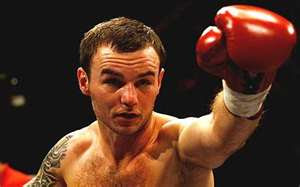 Kevin Mitchell believes he will smash John Murray to bits in their North v South lightweight battle of Britain before moving onto fight for a world title again.
Londoner Mitchell 27, who lost his last world title challenge to Aussie hard case Michael Katsidis in May last year. Mitchell (31-1, 23KO’s) took the first loss of his career badly and spiralled into a drunk filled depression, turning his back on boxing.
But after re-evaluating his life and being offered a shot back at the big time if he beats Murray 26, he was back in the gym after his family intervened to ‘sort his head out’
“I want to get back to the top and that’s where I want to mix it,” Mitchell told SkySports.
“John is tough but there’s nothing there to worry me. I’ll knock him out.
“He’s aggressive and has been getting away with it at domestic level, but let’s see how he reacts when he walks onto my shots.
“We’ll get John Murray out the way, smash him to bits, and then win a world title.”
Mitchell is far more content with life having addressed the problems that sent him on his downward spiral.
“The Katsidis fight didn’t go according to plan, but things were going wrong long before the fight happened,” he said.
“It was more due to my lifestyle and things that were happening in my life. My family life wasn’t right.
“I’ve got those things straight now, which is the main thing. If I hadn’t sorted them out I’d never have boxed again.
“Things had to be put right. It was the first time that what was going on in my life then had happened to me. “It won’t be happening ever again. I’m most definitely in a better place.
“I’ve had 80-odd fights in my life and I’ve only ever lost six times. That was the first I’d lost since I was 15 or 16.
“Now I’m happy and am happy in training.”
Looking back, Mitchell admits his parents were inspirational in getting his life back on track.
Better
“After the fight I jumped on the booze for six months. That’s the truth,” he said. “My mum came into the pub, pulled me out and said ‘right kid, you’ve got to get yourself back on track’.
“She said ‘you’re better than this, it’s time to sort your head out – you’ve had your time messing around’.
“And she was right. I had my time messing about. My dad was there too.
“So I got back into the gym a month before Christmas, started ticking over and boom, here I am.
“Seeing my mum and dad together, getting me out of the pub and saying buck your ideas up, it gives you a big kick up the backside. The penny dropped really.” quote source www.skysports.com