Lennox Lewis: ‘Haye can hit Klitschko with a shocking blow’ 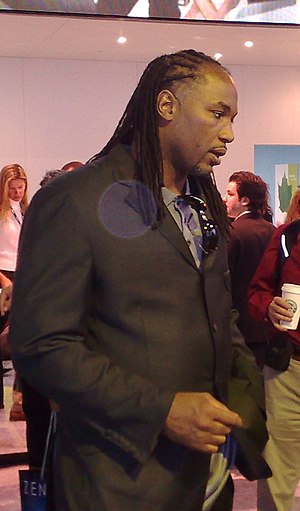 Britain’s last great heavyweight boxer Lennox Lewis believes David Haye needs a repeat of his performance against Nikolay Valuev, if he is defeat Wladimir Klitschko and follow him as an undisputed heavyweight champion of the world.
Haye arrived in Germany on Sunday, for next weekend’s fight in Hamburg on July 2, and Lewis speaking on BBC Five Live‘s Sportsweek programme this week, said that Haye should do very well if he can stick to his game plan, throw plenty of combinations and can expose Klitschko, the way he did against Valuev.
Haye 30, won his WBA crown by using movement and quick attacking bursts, before getting back out of range of the slower giant Russian in the November 2009 fight that was billed as ‘David and Goliath’. Lewis believes that those are the tactics that his fellow Londoner will need to employ again at the Imtech Arena on Saturday.

He has the speed and the weight in his arms and any shot he hits Klitschko with will be a shocking blow.” – David Haye

“What makes me give Haye a chance is what he did against Valuev, He fought a perfect fight, he kept moving, he stayed elusive and in the final round he almost knocked Valuev out.” Lewis said.

“He has the speed and the weight in his arms and any shot he hits Klitschko with will be a shocking blow.
“Klitschko has the bigger advantages but if David is able to stay with his game plan and move and throw combinations he should do very well.
“Klitschko is the best right now, he is the man everyone is aiming to get at. It’s really tough to be heavyweight champion of the world and it’s even tougher to stay there.
“His strength is his size, his reach and his weight. He is a true heavyweight and weighs about 20lbs more than David Haye. He has all those advantages and on paper he is the one they will pick to win because he is a natural heavyweight.
“His weakness is his chin, his speed and maybe his stamina. And they are things that David Haye can expose. His weight is a big thing for Wladimir Klitschko, Haye is light but he can use it to his advantage if he can stay away from him.

“But if they get into a clinch and Klitschko puts his weight on David it may sap some of David’s energy.” added Lewis.