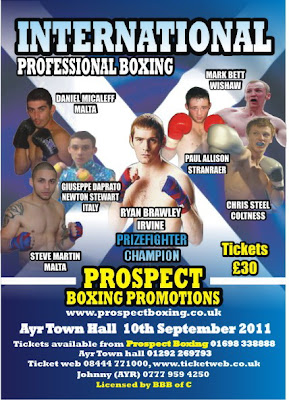 Irvines Prizefighter winner Ryan Brawley heads a card of international fights in Prospect Boxing’s next fightcard at Ayr Town Hall on 10th September. Coming off a loss to Stuart Green for the Scottish title in January, Brawley will be looking to bring himself back into title contention and fights over eight round.

Adding to the line up see’s the British debut of Danial “The Commander” Micallef ,the undefeated Malta born star squares off against fellow unbeaten fighter Paul Allison. Allison from Stranraer will be looking to impress a partisan crowd and is coming off a win against Louis Burn in Prospect Boxings last Show at Ravenscraig. With both fighters holding unbeaten records,someones undefeated record has to go!

Building on an impressive victory over Damian Dontchev, were he used an impressive jab to dominate to a points victory. Chris Steel looks to go 4-0 by taking on Steve Martin. In his second fight, Martin is making his British debut and comes by way of Malta. Coltness born Steel has had a strong start to his career but will certainly look to build on the experience of fighting 8 rounds in onbly his 3rd fight

Also in action on the night is Mark Bett who will be looking to extending his winning run by taking on Stranraers Giuseppe Daprato over 6 rounds.

After a successful shows in both Wishaw Sports Centre and Ravenscraig Regional Sports Facility, Prospect Boxing are proud to announce there first show of the new season at Ayr Town Hall on 10th September.
Tickets are available from Paul Graham 01698 338888 or Ayr Town Hall 01292 269793. Further details avail from www.prospectboxing.co.uk and Prospect-Boxing Facebook group www.facebook.com/pages/Prospect-Boxing/208247569205243