British BoxersAugust 19, 2011
LATEST BOXING NEWS0 Comments2 min read
19th August 2011
Fight weigh-ins
Matthew Hatton will make his ring return tonight against Belarusian Andrei Abramenka, since his unsuccessfull WBC light-middleweight world title loss against Saul Alvarez on points in March.
Hatton will be contesting the IBF intercontinental welterweight title fight against Belarussian Andrei Abramenka at Blackpool’s Tower Circus and will be hoping a win can help him Jump ahead to another world title shot in his natural weight division, possibly against Ukrainian Vyacheslav Senchenko the WBA holder. 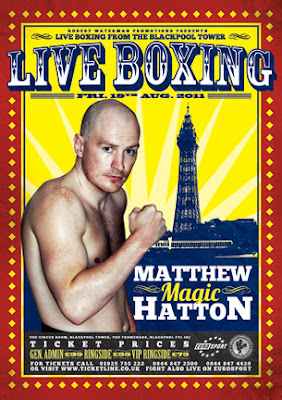 The Mancunian’s nutritional methods for this fight have been somewhat different from usual and to make sure he got down to fighting weight, Hatton has been eating the meat from Down Under Kangaroo! that has less fat content than beef or pork and therefore a more healthier alternative.

The European champions nutritionist has had him on the Aussie diet in the build-up to this title fight against Abramenka tomorrow and Hatton believes his preparations during an eight-week camp will see him overcome his opponent on Friday.
“Preparation is vital. I have 100 per cent confidence in my training.” Hatton said.
“I’m very confident about the fight, I believe I am a class above him but he is undefeated and will believe he can’t be beaten.
“I aim to take his confidence away from him early and kick on from there.

“I’m confident I can end the fight before the 12 rounds are up.” added Hatton

Abramenka. who has won 15 of his 17 contests, is a policeman during the day.

Kangaroo meat has around the same protein per 100 grams as chicken but has a third of the fat content and less calories.

Hatton added that he was ‘looking forward to a chippy and a few beers after the fight’.
Blackpool, The Circus Room, Blackpool Tower

The show will be shown live on Eurosport.