The fight looks like it will be the 24-year old Brits last one at 140lbs, before he moves upto welterweight, where he will look to become a two weight world champion and ultimately chase a fight with the No1 pound for pounder Floyd Mayweather Jnr..

WBA and IBF champion Khan, was close to facing Peterson in April, but the American pulled out of the fight because of contract wranglings and Khan fought Paul McCloskey instead. The fight Khan wanted was a unification showdown with WBC and WBO titlist Timothy Bradley, but that fight now looks dead in the water, after Bradley again turned the fight down.

“Opponents are quite hard to get. We asked about Morales, but he said no. Bradley has said no, just refused to fight me even though we offered him everything he wanted. I really think he just doesn’t want to fight me no matter what’s on the table.” said Khan.

“It’s too bad because the fans want to see it. But I know I am No. 1 in the division and that’s what 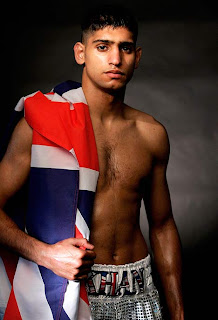 most other people say also because Bradley has not been active and he just won’t fight me.”

Khan though believes a fight against his the high ranked Peterson is a suitable opponent to face at this stage “I think it’s a good fight. Peterson is skillful and a good fighter. added Khan.

“But I will leave the negotiations to Golden Boy and this will probably be my last fight at 140lbs.”

“Lamont is a credible opponent, he got a draw with Ortiz, who is now fighting Mayweather and he’s my mandatory, it would be a good fight.

“He wants to fight and I am willing to fight him, it’s probably the best fight for me before I move up to welterweight.

“I know I will give him a tougher fight than Victor Ortiz, he’s never faced anyone as slick as me.”

Peterson 27, is a good operator, who won a final eliminator in his last outing against Victor Cayo and will likely give Khan a decent challenge, but shouldn’t cause the Lancashire lad to lose too much sleep. With a record of 29 wins, 15KO’s, 1 loss and 1 draw, he has mixed in good company.
Apart from his draw with Ortiz, his only loss was against the afore mentioned Tim Bradley via a 12 round unanimous decision for the WBO belt in 2009.

Khan’s promoter Richard Schaefer, CEO of Golden Boy Promotions, confirmed the fight was pending when he told ESPN.com that they are having discussions with Peterson’s manager and trainer, Barry Hunter and that the fight is almost inked to take place on the booked HBO date of Dec 10.

“That’s the fight we are pursuing and we are having conversations with Barry Hunter.” Schaefer said.

“They’re interested in the fight. Now we have to see if we can agree on a purse. If we can’t, I guess we will go to a purse bid, but we are working on the numbers.”

BritishBoxers visited Khan’s Bolton gym to catch up with the light-welterweight champion to get his views on fighting Peterson, the on off unification fight with Bradley and his plans to move up to welterweight, with the ultimate aim of fighting Floyd Mayweather.. Khan also talks his toughest opponent to date…. see video above for full interview.