Eames: ‘Leon can grab the British cruiserweight title with both hands’ 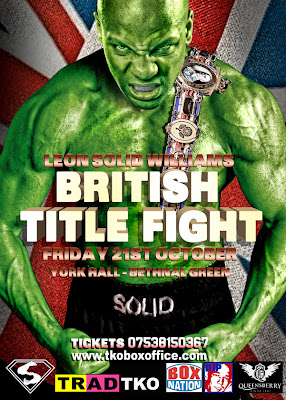 It’s been a cracking year for British boxing
fans, with so many sensational domestic battles already this year.

There has been Mitchell v Murray, Fury v Chisora, McDonnell v Hall and Walsh-Appleby being
amongst the very best to date – and it’s just about to get even better,
as on the 21st of this month Streatham’s hugely popular, all action,
Cruiserweight prospect Leon ‘Solid’ Williams challenges savvy former WBU
World and current British and Commonwealth Champ Rob Norton for his
British crown at York Hall in Bethnal Green.

It’s the contrast in styles – Norton, often
described as a cagey counter-punching fox, is an awkward southpaw,
whilst Williams is a  fast moving, forward coming, power puncher, right
out of the the ‘Iron’ Mike Tyson mould – that makes this fight such a
mouth watering, and potential ‘Fight of the Year’, prospect.

Williams, the current Southern Area
Cruiserweight Champ, is renowned for his raw talent and a fully loaded
arsenal of bone breaking punches. However, whilst clearly always a
talented and tough fighter, it wasn’t until he linked up with TRAD TKO
supremo Johnny Eames that this rough diamond was polished into a fully
rounded boxer with a newly acquired knock out reputation – just two
stoppages in eight bouts previously but two sensational knockout
finishes out of three starts since.

On paper Williams may seem to be the
underdog – having won just eight of his eleven outings, during which he
only defended his Southern Area title just the once. Whilst Norton,
whose record stands at 32 (19 KO)-4-2, has contested nine championship
title fights including two at World level – but It’s this brutal power,
plus the much improved ring craft the venerable Mr. Eames has worked so
hard on, that will test Norton to the hilt.

Having guided various of his charges to
British, Commonwealth and World titles over the years, Johnny Eames
knows what it takes to achieve Championship success. As such it comes as
no surprise that when he recently spoke of the upcoming British title
clash he appears confident that Williams will bring the Lonsdale belt
home to South London.

“First I want to thank Francis and George Warren,
as well as Frank Warren and Dean Powell, for making this fight possible.” said Eames

“At first I was in the belief that a British
title fight might be a little too soon for us, but now I think this is a
very good fight for us to take.

“The improvement in Leon is immense since
he’s been with us, so this could well be the right fight at the right
time, and is an opportunity we couldn’t turn away.

“Also being on the new BoxNation TV channel,
live, at this stage is a good opportunity for Leon and I’m sure that he
will grab it with both hands.” added the respected London trainer.


Heading up the support card for this battle
of the big boys will pitch Cromer, Norfolk’s Ryan Walsh against Melsham,
Wiltshire’s Liam Richards for the vacant English Super Bantamweight
title.