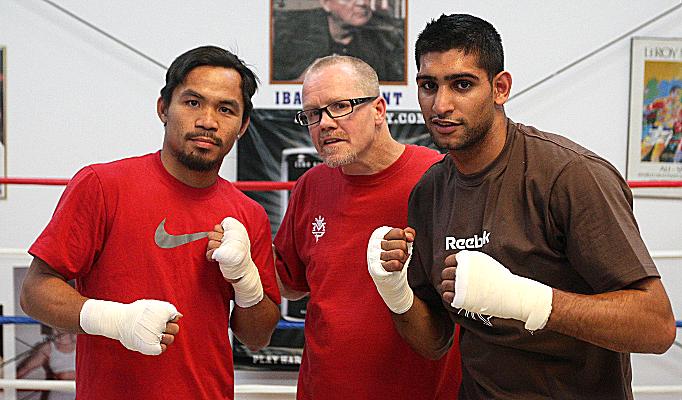 So as talks head closer British welterweight Amir Khan could be on his way with a high-profile fight with all-time great Manny Pacquiao in early 2016.

Pacquiao’s promoter Bob Arum says he is currently in negotiations with the Khan camp and that a fight in Las Vegas could be a possibility for a venue should the bout take place.

Pacquiao injured his shoulder in the much talked about points loss to Floyd Mayweather which was built up to be the fight of the century back in May but is now recovering after successful surgery on a torn rotator cuff and is fit to return to the ring in the early part of next year.

Arum has been quoted as saying “We were planning for Manny Pacquiao to fight at the end of February or, at the latest, the first two weeks in April.

“March is out of the question because of a big college basketball tournament in the United States. That gets all the ink at the time.

“I’m in the process of having negotiations with Amir Khan’s uncle and his lawyer, Robert Davis, and those negotiations are ongoing.

“I know there was a report that Khan was coming here (to the US) to make a deal with Ruslan Provodnikov, but he assured me that was not the case.”

Arum also went on to say that Khan is the only current opponent for Pacquiao who he is considering.

“I don’t negotiate with two people at the same time,” he added. “I think that’s unethical.

“I’m in the process of negotiating for an Amir Khan fight against Manny Pacquiao.

“I’m not saying necessarily that the negotiations will be successful, although I believe that everybody is negotiating in good faith. While those negotiations are going on, I’m not going to discuss any other opponent for Manny Pacquiao.

“There is a possibility that it could happen in Dubai, but I think it’s more likely it will happen in Las Vegas.”

The 28-year-old from Bolton has also been absent from the ring since May, when he defeated Chris Algieri on a tough points decision to retain his WBC Silver Welterweight title after failing to get the Mayweather fight which fell through.

For many years it seems like Khan had put his career on hold with hopes of fighting Mayweather but it never materialised and now the American has retired after his win over Andre Berto earlier this month.

But a fight against the 36-year-old Pacquiao would be a fantastic opportunity for Khan to secure a signature victory against a boxing great.