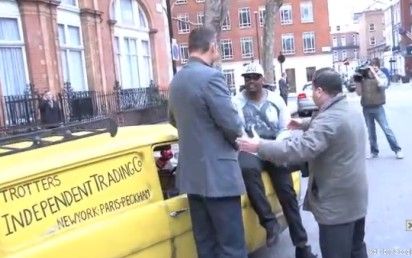 The Landmark Hotel was the venue for the conference to officially announce the world title fight, which will take place in Munich, Germany, on February 18th.

Things were all pretty good natured between the two boxers and Vitali asked if after the fight ‘Del Boy’ would buy him a van the same.

‘Del Boy’ chipped back, “Don’t worry about that, your gonna need one, i’ll get you one, it’s a collectors.”

A baffled Klitschko though, on reflection declined the offer saying, ‘It’s ok, actually, It’s too small, it’s not my dream’ – But Vitali did offer to have one ready for ‘Del Boy’ when he comes to Munich.

Both posed for photographs on the street outside the Landmark Hotel with the yellow van, which was complete with furry dice and a ‘Midwife on Call’ sign in the window in true Trotter fashion.

Chisora then asked, where Klitschko’s soon to be his; WBC title was so he could get a picture with it.

iFilmLondon.com were on hand to capture the event unfold and here is their video above.

After the street meeting, both entered the hotel to take part in the press conference.