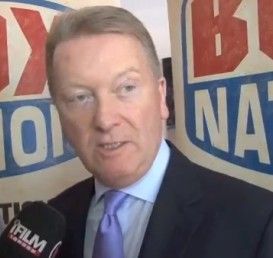 The undefeated rivals have traded insults for the last few years and will now finally get to settle their differences in the ring when they face each other on the blockbuster card title ‘Bad Blood’, headlined by Dereck Chisora’s rematch with Tyson Fury at the ExCeL London on the new rescheduled date of Saturday 29th November.

BoxNation will televise live and excluslive on Sky 437/HD 490, Virgin 546 and Talk Talk 525.  Join at www.boxnation.com. Or watch online at Livesport.tv and via iPhone, iPad or Android.

Plenty of pride and bragging rights will be on the line when these two warriors collide, bringing back memories of the first epic Nigel Benn v Chris Eubank encounter in 1990.

Hatfield ace Saunders will defend his European title against Eubank Jnr for the first time after claiming the belt with a stunning eighth round KO win over Italian Emanuele Blandamura in July.

The 2008 Olympian hasn’t put a foot wrong in 20 fights, claiming the British, Commonwealth and European titles, and Eubank Jnr. will be the fourth undefeated fighter that Saunders has faced in a row, after inflicting first losses to Gary O’Sullivan, John Ryder and Blandamura.

Brighton hotshot Eubank Jnr has blitzed his way through the middleweight division, knocking 12 out of 17 early with his lightning fast, dynamite fists, and is currently on a nine-fight KO run.

The son of the British great has been in Las Vegas training alongside Floyd Mayweather Jnr as he prepares for the biggest test of his career against Saunders.

Promoter Frank Warren is thrilled to have made the fight and that it will feature on the big ExCeL show alongside the Chisora v Fury heavyweight settler.

Warren said, “This is a fabulous fight between two undefeated British fighters and it has all the ingredients to be a thriller.

“Both men have wanted the fight and I’m delighted that it’s going to be on the same show as another big domestic feud between Chisora v Fury.

“Saunders has done everything asked of him so far winning British, Commonwealth, WBO Intercontinental, and European titles and as he’s shown, the better the opponent the better he performs.  This will certainly be the case against the young Eubank Jnr and he’ll take his game to another level.

“Eubank Jnr is undefeated and has looked sensational on his rise, but now he’s stepping up to the plate to prove that he’s the real thing by facing the best in the division and that’s Saunders.  Their rivalry has been building up over the last few years and now it’s time for them to lay it all on the line and prove who is the best.

“While it was unfortunate that Saunders missed out on a shot at the WBO World title recently, I’ll be applying to the WBO for this fight to be made an eliminator for the World title.

“With Chisora v Fury and Saunders v Eubank Jnr. on the same show, and with even more title fights to be announced over the coming days, this is going to be one big night of boxing in the capital.” added Warren.