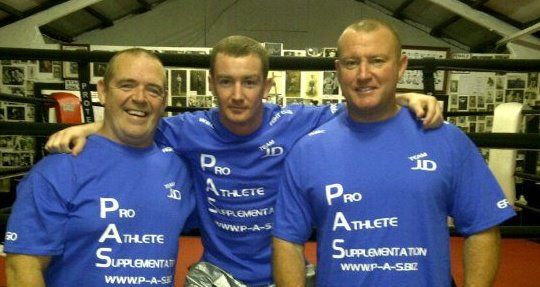 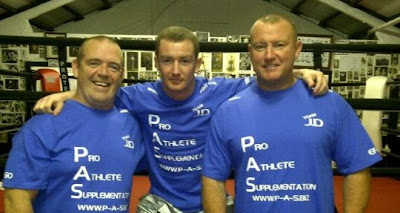 Liverpool’s John Donnelly takes on fellow Liverpudlian Mike Robinson tonight, in an all Merseyside derby that promises to be a good fight for the vacant English super-flyweight title.

Donnelly, 27, turned professional in 2007 and after six wins on the bounce in his first year, he was then beaten by Gavin Reid the following year, ending his honeymoon period in the game.
Problems out of the ring were a factor in the defeat to Reid according to Donnelly. But after getting his career back, he left promoter Tommy Gilmour and joined Frank Maloney, also teaming up with new coaches Danny Kelly and Sean Trodden.
With just six fights, all wins, since the the Reid fight, Donnelly was offered a crack at the British bantamweight title against then champion Stuart Hall. The move up in weight for the shot, didn’t pay off and John was stopped in round 5 last April.
This second title shot comes almost a year after his fight with Hall, but at his natural weight and coach Danny Kelly told British Boxers this week that everything has gone to plan with his preparations for this fight and has told fans to expect a new John Donnelly in this fight. 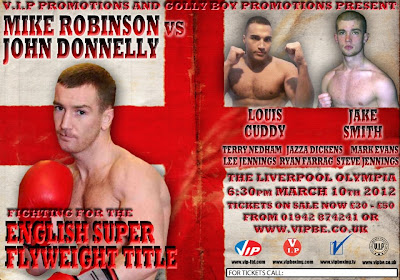 “Our preparation for this fight has been fantastic, everything has gone to plan.” said Kelly.
“John made the weight comfortably and is looking really good.
“We are not taking Mike Robinson lightly hes a good kid , but we have done our home work , this is going to be a cracking little fight both lads are
right up for it, and its yet another great fight for the Liverpool and Birkenhead Boxing fans.
“This will definitely help johns career for future , and I think he can go on to bigger an better things, people will be expecting the old john Donnelly in the ring on Saturday night, but they will all be surprised.
“Both myself an Sean Trodden (coach) have done a lot of hard graft with John’s style over the past few months and he’s one hell of a boxer.
“All the hard work in gym is done its up to the lads in the ring on the night to perform, it’s time to shine, team Venture Booom.” added Kelly.