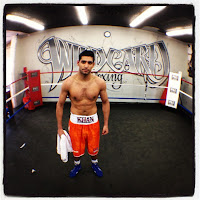 Within days of announcing his challenge against WBC Light-welterweight Danny Garcia on July 14th, Amir Khan has already said that he will
fight back in the UK in December.
He desires to bring over a fighter to the UK
despite troubles he says he had previously with Team McCloskey, and Sky Sports.

Khan is also hoping that his home coming fight can take place at his beloved Bolton Wanderers football stadium.

Khan who was set to fight on May 19th against
Lamont Peterson for the re-match is currently mapping out the year to his
fullest advantage and also giving UK fans a chance to see him in action in the
UK.

“I will definitely have another
fight this year, in November or December,! said Khan.

“I’d like to have a fight over here
and I’d like to bring a top 10 American over here for the UK fans because I’ve
not fought here for a couple of fights, I’d love to fight in Bolton again, it’s
about getting the timing right and making sure it fits properly, the only place
to fight right now would be the football stadium.”

It is still not certain which titles will be available
for the winner, the hearing with regard to whether both WBA and IBF belts will
be returned will take place in a few weeks and if that does not happen, there
still will be a disagreement, as Danny Garcia was due to meet mandatory
challenger London based Ajose Olusegun.
However if the belts are returned it would mean a unification fight will
be more important.
Khan told Sky Sports News, “It’s a great match up with
the WBC title on the line, I don’t know about the other two titles the
governing bodies will make their decision.” Speaking about Garcia he said, “My
little bit of experience ahead of him should work in my advantage, he’s never
lost before, it’s going to be a good fight.”
Khan has taken two weeks off and will probably remain in
the UK for another week before he heads back to Los Angeles to continue his
training to prepare for his fight against Danny Garcia on July 14th,
he said. “I’ll be ready so when I go back to LA I’ll be ready to work hard
again and work with Freddie Roach on a new game plan.”
It did not take him and Golden Boy very long to find his
replacement even though it may of set the boxing world and Team Khan back, this
may be short notice, however all those weeks in training for Khan cannot go
wasted, now this fight is made, all the creases about if the belts are given
back and if Olusegun is out of the equation will be known in the coming weeks.