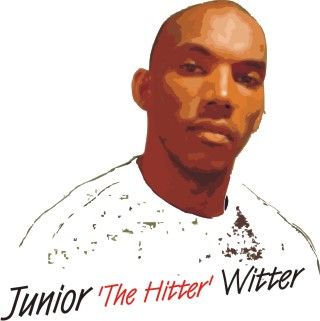 Junior Witter; The Begining, Middle and not quite the End 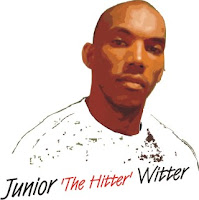 When Junior ‘The Hitter’ Witter fell out of the ring in his forgettable Prizefighter final against Yassine El Maachi in June last year, the common consensus was; that the former two time world champion who went on to lose possibly the worst final in the Prizefighter tournament’s history, was now at the end of his career and that this was his final swan song as a championship level fighter.
But on Saturday night the Bradford boxer rolled back the years to win the British welterweight title with a unanimous points decision over Colin Lynes at the Hillsborough Leisure Centre in Sheffield.
Witter, now at the ripe old age of 38, and adorning purple dyed hair, that suggested designs younger than his elder years suggested, wasn’t vintage, but he is back as British champion and after all these years, ups and downs, a world title and fights against some of the worlds best fighters over the last 14 years, Junior is on the world title trail again!
Witter entered the ring against Lynes in this make or break fight for him, looking in top shape and determined to prove all his doubters wrong. And prove them wrong he did! Winning a British title for a second time in two weight divisions.
It was a case of Lonsdale belt lighting striking twice for Witter against Lynes. Junior had defeated the Londoner on points in 2005, to win the British light-welterweight title the first time. That night 7 years ago the European and Commonwealth titles were also on the line and in his next fight, Junior went on to win the WBC light-welterweight title against DeMarcus Corley. 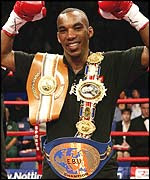 The boy from Bradford, turned professional in January 1997, aged 18. After an amateur career that saw him fight everyone he could in his weight class up and down the country, building up a win some lose some record. One amateur opponent who beat Junior was future gym mate and friend Ryan Rhodes. Junior had watched Rhodes beat a couple of his gym mates earlier and remembered him as a ‘stiff, stocky kid’ good but not a lot of movement.

The next time he saw Ryan was when the pair met and produced what is remembered as an amateur classic in Yorkshire.

After the loss to Rhodes, Junior was so impressed with him and the job that Brendan Ingle and his son Dominic had done, turning Rhodes into a slick boxer with good skills and style, from the stiff stocky kid he remembered. Junior believed that if they could do that with Rhodes then they could do it with him and after the blessing and advice from his amateur coach Alec Allen, Junior joined the Ingle gym in Sheffield.

He had his first fight at the Green Bank Leisure Centre in Derbyshire, against local based Canadian Cameron Raeside, it ended in a disappointing draw for the new pro, but never a setback in the mind of Junior.

He scored his first win as a professional in his next fight in the March, travelling to Yarm to beat John Green over six rounds. Five more wins that year ending 1997 with a record of 6-0-1. Witters started 1998 in the same way he had his debut year as a pro; a draw against Birmingham’s Mark Ramsey over six rounds.

Junior didn’t let the glitch get him down and was back in the ring three and half weeks later to outpoint Brian Coleman, before going in a month later in the April, on a late call up against the very capable former world champion Jan Piet Bergman from South Africa. Junior baffled Bergam over six rounds taking the decision. That win over Bergman really shown the capabilities of this Ingle gym fighter, who wore all the signs and switch hitting bravado of the Winkobank Sheffield boys, under the guidance of Sheffield based Irish coach and father figure, Brendan Ingle, one of the Godfathers of British Boxing.

Bergman had only lost once in 35 fights, it was only Juniors 10th outing, 8 wins and 2 draws, proof that early career setbacks and tough tests, will stand a fighter in good stead in the future, when the hard fights and tough grounding really matters. It was meant to be a routine night for Bergam, Junior breezed it. 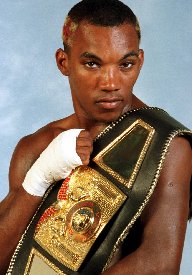 Eighteen fights and eighteen wins since losing to Zab Judah in 2000 Witter had finally achieved the pinnacle of his career so far a via a points decision, judges scores read 119-111, 118-112 and 117-113 unanimously in favour of Witter. During the fight he had frustrated, taunted and confounded Corley to defeat. From the first round Witter had switched stances constantly and Corley just couldn’t suss Junior out.

After claiming the world title, Junior praised his team for what they had done for him, but his special thanks went to his amateur coach and the man who had got him on his way and off the streets of his tough Bradford estate, Alec Allen. Junior dedicated the win and his world title to the former teacher and unsung hero to many in Bradford.
Two defences of the title followed in 2007 a win over Mexican Arturo Morua, TKO 9 was followed by a great 7th round stoppage of the very talented and former WBA world champion Vivian Harris. – Junior dominated Harris throughout before stopping him and after the fight Harris cried fowl play and accusing Junior of taking drugs, afterwards saying; “I don’t know if they injected him with stuff, but he’s never beaten anyone of my calibre, something was wrong.” John Ingle, Witter’s manager, said: “Junior is tested after every fight and that was the case last week.” – Witter was furious and instructed his lawyers to consider action against Harris about the slanderous allegations.
After eight months out of the ring Junior made the third defence of his world title against unbeaten Timothy Bradley at the Nottingham Arena in May 2008. It was to be a bad night for Witter, tasting the canvas in round 6 and went onto lose his title via a split decision 112-115, 115-113 and 114-113 – It was his second defeat as a professional.
He just never got going in the fight and instead of this time frustrating his opponent, he frustrated himself with a sketchy performance. He failed to impose himself on Bradley, as he had done on Harris in his previous defence. Afterwards Junior admitted to being sloppy on the night, but was still convinced he had done enough to win, when he said; “I’m gutted, I can’t believe it,” he said. “I thought I’d done enough. I know I had the knock-down but I thought I worked hard enough in the rest of the fight to win comfortably. I don’t think you saw the best of me tonight. Timothy Bradley came out and fought and took some good shots. He caught me with a hell of a shot. (in the 6th) But I was just a bit sloppy. It was a perfect shot. He’d been trying it all night, I knew he was going for it. But I won rounds before it. I won rounds after that.
“I’m still going to carry on, no way am I retiring after that, I’m going to fight until I’m forty. There’s a lot more in the tank. There are better nights for me to come and Junior Witter will be back as a world champion.” added Junior.
Following the Bradley defeat Witter returned to the ring on 8 November 2008 and scored a third round knockout of Argentinian Victor Hugo Castro. He knocked his opponent down in the second but was unable to finish it due to the bell instead finishing the fight early in the following round.
Witter was then given the chance to fight for his old WBC title when in May 2009, Bradley was stripped of the belt for choosing not to fight his mandatory challenger Devon Alexander. This handed Witter an opportunity to fight Alexander for the now vacant belt.
The contest took place in California on 1 August 2009 with Alexander proving an hard nights work for Witter, Alexander boxed great that night and Junior never got into the fight and retired on his stool at the end of the 8th round after sustaining an elbow injury in the 4th, that he claims he couldn’t shake.

“My elbow went in round four. Junior said afterwards. “I battled through for a few rounds but I couldn’t keep doing it. I wasn’t able to box the way I wanted to and I decided it was time to let it go. It was a mutual agreement with my corner. As much as I wanted to do it, I just wasn’t able to. It wasn’t that I wanted to quit, because I knew I could win. I just wasn’t there on the night. I don’t think it’s my last fight but I’ve got to decide where I go now. I need to get away for a bit and let my injuries heal.”