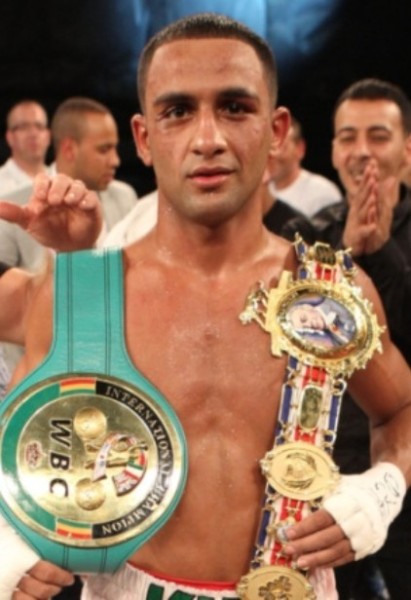 Last night at the Ponds Forge venue in Sheffield, Kid Galahad further progressed toward competing for world title honours by defeating Spaniard Sergio Prado for the vacant European super-bantamweight strap. Almost twenty years ago idol Prince Naseem Hamed captured the European bantamweight title against Vincenzo Belcastro via a unanimous decision in the same venue, dropping the Italian in the first and eleventh rounds.

Hamed is one of the great names in British boxing to have been associated with the famous Ingle gym – operated by Brendan and his two sons, Dominic and John – where Kid Galahad, real name Abdul Barry Awad, trains out of; past boxers include Herol Graham, Johnny Nelson and Junior Witter, with the Ingles currently guiding mandatory IBF welterweight challenger Kell Brook and upcoming potential stars Leigh Wood and Adam Etches.

It has been well documented that the new European super-bantamweight champion was a troublesome youth. At the age of two he moved from Qatar to a tough area in Liverpool where he had gotten into much trouble, admitting that he was a ‘bad kid in a bad area’. At thirteen he relocated to Sheffield where, visiting a local mosque, he met Prince Naseem; Barry cited his interest in boxing and Hamed subsequently recommended that he go to Brendan Ingle’s St. Thomas gym if he wanted to become a champion.

Brendan immediately saw the potential in Awad and said that he would have to be in the gym at six every morning and would have to stop getting into trouble if he was to realise his full capability. The trainer was advised by many to simply get rid of Barry as he was a nuisance but Brendan wouldn’t hear of it, even having Galahad enrolled at a local school in order to straighten out.

Kid Galahad, which comes from the Elvis Presley film of the same name, is these days known as a ‘gym rat’ that lives in the gym, often sparring the likes of Kell Brook and Junior Witter, who are each physically bigger than Barry. He is also seen as part of the Ingle family, Brook calling him his ‘little brother’ and Brendan as proud of his charge as any father could be of their own child.

After the fight with Prado, Galahad, who last night improved to 16(8)-0-0, dedicated his performance to Brendan Ingle, who was miraculously in Barry’s corner after quickly recovering from a rare form of epilepsy, saying that if it wasn’t for the legendary trainer then he would likely be serving life in prison.

Galahad, who vacated the British super-bantamweight title he won last September via a tenth round TKO over James ‘Jazza’ Dickens, last night looked sensational against Prado, who fell to 9-4-1, winning on the cards by 120-108, 118-110 and 117-111; the judge who scored every round for Barry, Anssi Perajoki, seemed to watch the same fight as I did as I couldn’t give the Spaniard a single round.

Galahad was on the front foot for near enough all of the fight and demonstrated sheer perfection in distance judging. He was constantly switching effortlessly from orthodox to southpaw and Prado looked completely overwhelmed at times by the blistering hand speed and slight angles offered by Barry. At times Prado retaliated against Barry’s offence with his own attack but Galahad was too slick and was rarely touched; after the bout, Galahad hardly looked as if he had even been in a fight at all.

In the fourth round the referee had given Barry words for pushing down, but Prado’s head was often dipping down to waist level to avoid Galahad’s accurate shots. In the seventh the Spaniard was in trouble where, bemused by the southpaw stance, he was forced to cover up against the ropes and hold to survive, and much of the same continued in the eighth. In the eleventh round Prado hit the canvas but Italian referee Giuseppe Quartarone ruled it as a slip.

Prado’s record was deceiving in that it didn’t represent how tough a character he is; after the fight, Barry told Channel 5 that he had seen footage of the Spaniard and knew that he was a rugged, come-forward fighter and that he had to be in his best physical shape to meet the challenge. He also added that he is only two fights away from being ready for the world title; world renowned boxing commentator Al Bernstein noted that Galahad is in fact a more impressive fighter than Nas was at the same stage of his career.