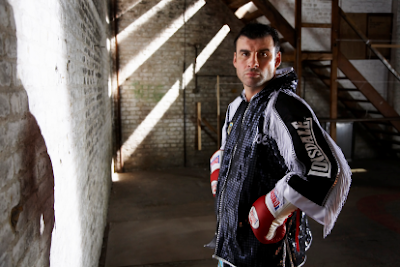 British boxing legend, Joe Calzaghe
CBE, MBE, has signed a partnership agreement with iconic British boxing brand
Lonsdale, which will see the Super Middleweight, who retired from professional
boxing in 2009 with a 46-0 undefeated fight record, endorse Lonsdale training
apparel and related equipment and participate in promotional events and
activities for the brand both nationally and internationally.

Joe’s first public appearance as an
official member of the impressive Lonsdale boxing ‘stable’ of sponsored
athletes (that includes Carl Froch, Nathan Cleverley, David Price, Jamie
McDonald, Tom Watson, Cathy ‘The Bitch’ Brown, Darren Barker and Paul McCloskey)
will be attending the launch of London Fight Zone, at London’s legendary
Lillywhite’s sports store in Piccadilly Circus. At the launch Joe will be
meeting fans and media while checking out the unrivalled range of boxing and
fight related apparel and equipment on offer.


Joe
remains one of Britain’s most successful-ever boxers and his record speaks for
itself. He is a former WBO, IBF, WBC, WBA Super Middeweight and Light
Heavyweight Champion and the longest reigning world boxing champion in recent
years. Over a period of ten years he made 21 successful defences of his WBO Super
Middleweight title and retired undefeated in 2009. In 2007 he won BBC Sports
Personality of the Year. “Over the course of my career I have often fought and
trained in Lonsdale clothing and equipment, including during my unification
fight with Mikkel Kessler at the Millennium Stadium in 2007 and against Bernard
Hopkins in Las Vegas in 2007,” he says. “Now its great to be actually working
with Lonsdale and helping to promote the brand.”

According to Sunny Singh, Lonsdale Sports
Marketing Manger, “Joe’s an absolute legend of British boxing and it’s great to
have someone with his great experience and credibility joining the team. He
joins boxing greats such as Muhammad Ali, Henry Cooper and Sugar Ray Robinson
who have all represented the Lonsdale brand.”

ABOUT LONSDALE
Firmly established as the leading brand of British boxing equipment and clothing, Lonsdale is steeped in over 50 years of fight history. From humble London origins the Lonsdale brand quickly became the hallmark of
boxing champions throughout the world, with its legendary quality and authenticity.