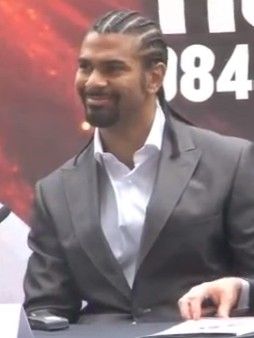 David Haye and Dereck Chisora went head to head again on Wednesday at the final press conference meeting before the pair meet for real, in what Chisora’s manager Don Charles called ‘Squeaky bum time’ the old Alex Ferguson saying to describe the end of the football season and the push for the title, when the nerves are at fever pitch and only cool heads and strong bums prevail.

The presser was heated and both fighters exchanged the usual cusses that were the seeds that started the whole Haye v Chisora show and what has grown into a mixture of a fight you want to see, but it feels like a guilty pleasure, naughty but nice!

After the fighters left their respected seats at the table, the traditional stare-down took place either side of the now customary galvanised metal security fence, which has been used in previous presser calls between pair and is in place to stop them making any sudden involuntary attack on each other, which would totally balls things up for the already controversial promotion of the fight!

They continued to goad each other in their own personal conversation, which turned out to be, who would be knocking who out! – Neither could agree, but eventually agreed on something and that was to have a £20,000 side bet, on who would knock who out. – ‘O’ no not illegal betting as well, to go on top of every-other discrepancy the fight is being held up for. There was even talk during the press conference of performance enhancing drugs, with each in a round about way casting suspicion of the other.

But hearts were taken out of mouths when Haye and Chisora both agreed if they lost, they would donate the £20,000 wager to a charity of the winners choice.

Squeaky bum time? Nar these two have been here before and have conquered the syndrome. Nerves are always there for a fighter and it is those that allow them to perform and induce the natural survival instinct to survive under attack.

video by ifilmlondon
The talking is over, I think? And should nothing go drastically wrong in-between now and Saturday night, the most controversial, biggest talked about and more than likely the most watched British fight for a longtime will take place. Hopefully after it is over and the dust has settled, normal service can be resumed… But somehow I doubt it, British Boxing may never be the same again and the fall out could have lasting implications on how the sport is governed and fights are sanctioned in the future…. and by who? Would the last one out of Upton Park switch off the light please.