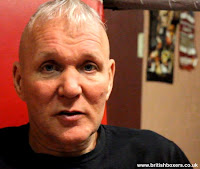 Amir Khan’s fourth-round stoppage reverse to Danny Garcia in Las Vegas on July 14 left the former WBA and IBF light-welterweight titlist, and his fans, reeling yet calls for Khan to retire at the tender age of 25 were a knee jerk reaction to the defeat.  Khan, 26-3 (18), insists that he will bounce back, although an immediate return was scotched when Garcia inked a deal to rematch Erik Morales in October.  Manchester-based trainer Bob Shannon, (right) though, believes that Khan will be king once more as long as he learns from the defeat.

“Amir stayed too long in punching position and should have used his feet to move away after throwing instead of looking for more shots,” said Shannon when speaking to BoxingScene.  “Barry McGuigan [speaking for Sky] gave a very good analysis when he spoke about Amir’s need to tighten his defence.  If Amir listens to what Barry said and makes adjustments then of course he can become a world champion again as he has so much going for him.  Amir’s probably too tough for his own good, he sees the red mist when he gets hit and trades, but has to learn that you can’t always go to war, and I’m sure he will.  There was talk of him retiring, which is ridiculous because he has a bright future ahead of him, so he may decide to take care of some unfinished business at light-welter then see what welterweight holds.”

Sheffield’s Kell Brook, 28-0 (18), currently sits atop the British welterweight pile and is one fight away from a world title shot.  Matchroom’s Eddie Hearn, speaking to Shaun Brown, today told BoxingScene that Brook will headline a show in Sheffield in October.  Indeed, a showdown with Argentina’s Hector Saldivia, 41-2 (32), in an IBF final eliminator is rumoured to be in play as Brook’s gruelling majority decision win over Carson Jones in July left the contender battered and bruised and, perhaps, in need of one last learning curve fight before gunning for the winner of Randall Bailey versus Devon Alexander, who meet in December.

Shannon, who brought Matthew Hatton into a fight with Brook back in March, believes that the 26-year-old is destined for big things and was heartened by Brook’s honesty following his gut check against Jones at Sheffield’s Motorpoint Arena.
“Kell Brook is in a similar boat to Amir because Kell had a tough time late in that last fight, he said he may look at how he makes the weight for his next fights and that is good to hear because it shows that Kell is really thinking about those little things you need to tweak to get to the top-level,” said Shannon.  “These are two of the most talented lads in the U.K., so it is great to hear them talking about needing to improve.  If they both get it spot on then it means good times ahead for British boxing.”
Shannon also feels that Matty Askin, one of his charges, will benefit from a recent defeat to Jon Lewis Dickinson in April.  Askin, 13-1 (9), came up short on the cards in his British cruiserweight title eliminator, but has come back to the gym with a glint of determination in his eyes according to his trainer.  “Matty Askin can learn from Amir, who lost a fight, but came back really strong,” said Shannon.
“Matty’s attitude has been fantastic, he’s a pleasure to work with and I believe that he has big things ahead of him because he learned a lot against Dickinson.  Matty knows what it takes to be a champion now and I’m convinced that he will go from strength-to-strength.  It will also be great to get [Commonwealth welterweight champion] Denton [Vassell] out again soon, he’s working on his next fight as far as I know and one thing’s for sure, he won’t be found wanting if a call comes to take a fight as he is always in fantastic shape and has a great engine.”
Please send news and views to neckodeemus@hotmail.co.uk or Twitter @Terryboxing.
By Terence Dooley