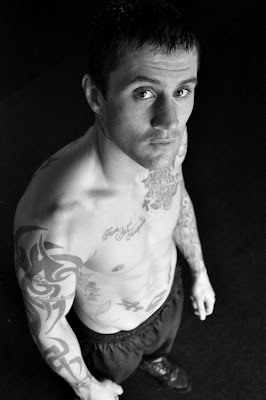 The no nonsense WBO lightweight champion Ricky Burns will defend his title on Saturday night against the equally no nonsense challenger Kevin Mitchell in a fight that has classic written all over it.

The SECC Arena in Glasgow will be electric on Saturday night. The Burns fans will be out in unison to cheer on their hero in their back yard. Mitchell’s fans will make the long journey north to back their man and the night guarantees to be big fight material in and out of the ring.

Just to make things sweeter and the anticipation longer, before the ring of the first bell and adding more suspense, the emotional anthem ‘Flower of Scotland will be belted from the rafters by the Burns faithful, before star turn MC Michael Buffer will swap the bright lights of Las Vegas for a Saturday night in Glasgow, and will announce the fight and then call out his immortal phrase “Lets Get Ready To Rumble” to get this historic Auld rival showdown under way.

Some of the biggest names in British boxing history, including Nigel Benn, Chris Eubank, Naseem Hamed, Pat Clinton and Paul Weir have all boxed at the historic Scottish venue and Burns is excited to follow in their footsteps.

“To fight for the first time at the SECC in the biggest and most important fight of my life against Mitchell where all these great names have boxed is an unbelievable honour,” said Burns.

“You can’t get bigger names than Benn, Eubank and Naz, plus Clinton and Weir, they’re like British boxing royalty and I can’t wait to get in the ring and thrill the fans like they did with their appearances there,”

Burns said, “Everyone knows Benn, he was all-action and one of the greatest British fighters ever. You just knew he would be in a real fight every time he got in the ring and you would get value for money. That’s the kind of attitude that I will be bringing to the ring against Mitchell,”

Burns’ boyhood hero WBO World Featherweight Champion Naseem Hamed put on two explosive performance there, knocking out Armando Castro in four rounds in January 1995 and then demolishing Said Lawal inside a round in March the following year. 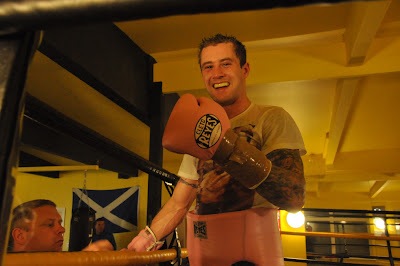 Scottish world champions Pat Clinton and Paul Weir both defended their titles at the SECC. Clinton defeated Danny Porter on points in September 1992 to retain his WBO World Flyweight title, but lost it there in his next defence against Jacob Matlala in May 1993. While Weir beat Kevin Jenkins in March 1993 and in his next fight made history by winning the WBO World Minimumweight title in only his sixth fight stopping Fernando Martinez in seven rounds.“Naz was my favourite fighter when I was growing up, he was the reason that I got into boxing and I used to stay up to watch his fights. In fact, I was more interested in what Naz was wearing as he used to changed his shorts for every fight and all the exciting ring entrances. I remember the Castro and Lawal fights because Naz was just knocking people cold with his punches, the Lawal knockout was pretty impressive because it was the first punch he threw in the fight,” continued Burns.

“Clinton and Weir are legends of Scottish boxing. We haven’t had that many world champions, but the guys that have won it are pretty special. For Weir to win the world title in just his sixth fight is pretty amazing. I was the first since Weir to become a two weight world champion in almost 20 years which was a big achievement for me,” 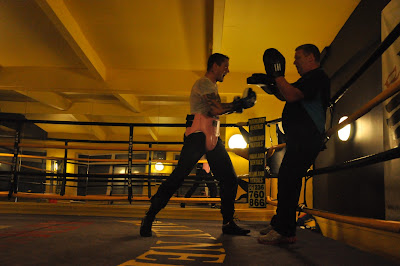 The Champion is in great shape

Burns, 29, boasts a professional record of 34 wins from 36 bouts and became world lightweight champion in May last year after outpointing Michael Katsidis at Wembley Arena. Prior to that the Coatbridge man held the WBO super featherweight title and goes into the Mitchell fight unbeaten in 6 world title fights and a two time / two weight world champion, Scotland’s first…. Ricky Burns is in his Prime.

Roman Martinez
WBO super featherweight title
Won UD 12
Both Burns and Mitchell have great respect for each other, infact they do for all their opponents. These are two fighting men who let their boxing do the taking and dont go in for the pre fight name calling and mind games. This is a fight that doesnt need any pre fight nonsense from either, it sells itself.
Ricky Burns is a big draw in Scotland, the latest hero to carry on the great traditions of the fighters who have gone before him north of the boarder and he is determined to keep the belt firmly around his waist and in his home country.
Burns in great shape after a long hard training camp with coach Billy Nelson, admits to having full respect for Essex boy Kevin Mitchell but is confident of victory; “With only a couple of weeks to go until the fight, I’m in great shape and really looking forward to it.” said Burns. 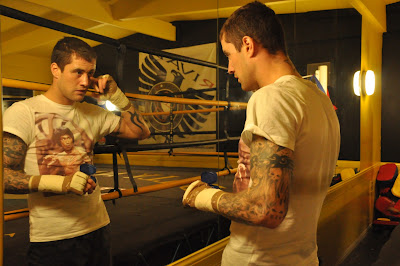 “It’s going to be a great fight; I don’t like to boast and make predictions but it will be cracker. The best fight you’ll see in a long time. It’s been on the boil for the last couple of years and the fans and
press have been desperate for it to happen, it’s fantastic that it’s on
at last.
“We are both at the top of our game now and I’m in this sport to prove that I’m the best, next to me Mitchell’s the best around and it will be
great fight between two warriors.
“But this fight is the fight I’ve wanted and it’s got me really excited, Mitchell’s going to bring out the best in me and I believe that the fans are going to be in for an unbelievable fight. I know Mitchell is training hard to take my world title and full respect to him for coming up to Glasgow and challenging for it….. But it’s staying here in Scotland.”
Mitchell’s fight with John Murray last July was voted Fight of the Year after the Londoner bounced back from his world title defeat to Michael Katsidis in May 2010. Unbeaten in 30 fights going into that fight with the Australian champion, Mitchell didn’t perform that night in-front of his fans at his beloved West Ham United ground and was stopped in 3 rounds.
Mitchell has had one fight since the Murray victory, a points win over tough Dominican Republics Felix Lora over ten rounds.
Kevin Mitchell’s Last 6 Fights
10th February 2012
Felix Lora
Won PTS 10
16th July 2011
John Murray
vacant WBO Inter-Continental lightweight title
Won TKO 8
15th May 2010
Michael Katsidis
interim WBO lightweight title
Won TKO 3
13th February 2012
Ignacio Mendoza
WBO Inter-Continental lightweight titleWon KO 2
5th May 2009
Breidis Prescott
vacant WBO Inter-Continental lightweight titleWon UD 12
18th July 2009
Ruddy Encarnacion
Won TKO 8
After not taking the game seriously when it mattered the last time and paying the price, Mitchell has turned it around since putting his head down and arse up, grafting his way back into world title contention.

He seems to be in a better place now and looks to have sorted out his personal problems under the wing and guidance of Jimmy and Mark Tibbs. He is now in tip top condition, mentally and physically and will not want to fail in his second shot at world glory.

Equally though Mitchell is full of admiration and praise for the champion Burns and admits to talking to his fellow boxer on Twitter and often engage in online games together.

But the time for games and niceties is over and Mitchell is predicting a win in a fight not for the faint hearted.

“I rate Burns very highly.” said Mitchell. “He’s a great fighter and has really proved himself as one of the top champions in the world. “Come fight night once we step into the ring the friendship is over, this is business time.
“You can’t beat Ricky’s personality, he’s a lovely man and a mate of mine. We genuinely get on well and there won’t be any trash talking. But once we get in the ring we fight, that’s our job. I’ve wanted this fight for a long time now and Ricky has given me the chance. I’m determined to win it, but I know I’m in for a hard night’s work.
“I’m going into the lions den and I know I can beat him and take the world title.  Burns is a top kid and I’ve got to be at top of my game, the
fittest and strongest I’ve ever been in my life.
“I’m promising you now you’re going to see the best fight of the year or any year,”
“This is a real fight between the two best in the division and it’s not going to be for the faint-hearted.”
By Chris Maylett
www.britishboxers.co.uk
@britishboxers
Pics by
www.boxingportraits.com

~ What the Trade Think?