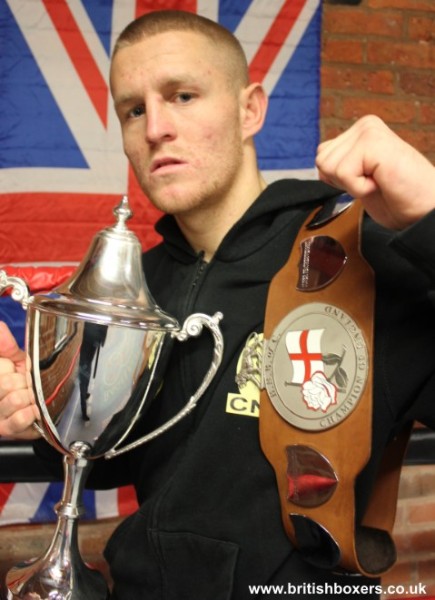 Unbeaten lightweight contender Terry ‘Turbo’ Flanagan is having to be a patient man and bide his time while he awaits the British title shot he and his camp believe they deserve. In the meantime Flanagan will take on former ABA champion Michael Grant at the Oldham Sports Centre on Saturday night and now hopes to keep busy until his big chance comes along.

A Former English title holder at super-featherweight and Prizefighter winner at lightweight Flanagan, 24, is looking towards current British title holder Martin Gethin, that is the fight he has set his sights on. Gethin is being lined up for a defence against Anthony Crolla. The British Boxing Board of Control put Gethin versus Crolla out to purse bids for August 14, with the lightweight contest to take place by December. The fight had looked like taking place on the ill fated Haye-Fury bill in September at the Manchester Arena, but Haye was cut in training and the show was pulled. Matchroom Boxing have since reschedule the Haye-Fury for February 8th next year. But with Gethin due to defend before December that date is out.

A WBO world title shot against champion Ricky Burns was Crolla’s top target and with both signed with Matchroom that fight was looking like making itself before Burns had his jaw broken in his draw with Beltran. It looks like Burns will be out of action for some time while his jaw heals,  leaving Crolla to face Gethin for the Lonsdale belt he once held, with Flanagan facing the winner unless events change and don’t rule it out at this stage.

According to Flanagan’s coach Maylett there is the chance Crolla could side step his shot at the British title against Gethin for a bigger fight leaving his man in line to challenge Gethin instead.  “I think we will hear very soon what route Crolla’s going to go down, he has the first go at Gethin but he might pass up on the opportunity for bigger titles, ie, the European or a fight that if he was to win, could get him in a world title fight and because Crolla has won the British before I personal think after his win over Rees it might be a step backwards for him going in with Gethin.” Maylett told www.britishboxers.co.uk

“I think there is a real chance Terry could get this fight (against Gethin) before Xmas. If it was to happen I could see it being a great fight, both throw lots of punches and would be good viewing. I feel Terry though is the hungrier of the two and this would be the difference in the fight, added to that Terry is more skill full.

“But any talk of title fights and all that is a waste of time if Terry doesn’t deliver against Grant on Saturday night, he has to be up for every fight now more than ever, he will get his chance but this game is about patience, our time will come if he keeps on doing what he’s doing and improving he will win that British title and more I have full confidence in his ability and know how much he wants it.”

New dad Flanagan, has been getting himself into great shape over the summer and is ready to get his campaign back on track, he now seeks the big names in the sport to test his slick southpaw skills against. While Flanagan waits to get his title shot he wants to keep busy and takes on Grant just up the the Oldham Road, not far from his Ancoats home. Grant has not fought since June 2011, that fight was points defeat against Karl Place a friend of Flanagan’s and charge of Flanagan’s trainer Steve Maylett.

Grant, 30, was a star amateur and blazed onto the professional circuit in 2005 he was unbeaten in his first 13 fights before losing on a cut in the Prizefighter in 2009 to Jason Cook, he then lost his next fight, a light-welterweight English title shot against Steve Williams on points and then disappeared from the game for over a year. He came back with a win then since that loss to Place in 2011, he has not been seen for another two years. It is to be seen if he can turn back the years against Flanagan (20-0. 6 KOs) and cause an upset, but it is unlikely. But Flanagan’s coach Maylett is not taking Grant (13-3-1) lightly and is expecting him to come in good shape and looking to upset the apple cart.

“This is probably the hardest fight on the card, I know Grant has been in the gym training and is looking for a way back into the lightweight division. He’s not been sat idol for two years, he’s been in the gym and working hard but the opportunities to get on shows haven’t come for him because of promotional issues, plus he doesn’t sell many tickets like promoters want.” added Maylett.

“He’s a good fighter and I would have preferred the fight to have been over more rounds as I feel Grant starts to fade after six however,  I still believe Terry will be to sharp for him from the start.”

A scaffolder by day Flanagan knows hard graft, he is also an avid dedicated trainer and has to juggle his training around his working day, he hopes that one day he can leave work and dedicate himself 100% to his second chosen profession and is determined this season to get the fights that will bring him the awards and financial security.

“I had a break from boxing after the Nate Campbell fight in April and got back in the gym over the summer and have trained hard since then.” Flanagan explained to us.

“I was hoping I could get a fight early season. Last season I wanted a few more fights but they didn’t happen. I want title fights this season and I know I’m close. The British Boxing Board of Control had me in a final  eliminator for the British title against Liam Walsh but he pulled out, I was willing to fight anyone else and my manager and the board tried but no one took the opportunity up. So now I’m being made mandatory challenger to the winner of Crolla and Gethin.

“I work hard every day in the gym it is hard juggling work, boxing and family life but I know that if I keep working hard I will get my rewards. If I could give work up I would but I can’t afford to at the moment. When I can survive from the money I earn from boxing I will, as I feel a lot better in training when I’m not working. I have a hard physical job scaffolding don’t get me wrong I enjoy working and have some great mates who I work with but it defiantly hinders my training you can’t train as hard as we do and work, something has to give and when I get a title fight I will give work a rest and put all my eggs in one basket and hope I bring the title home.” Flanagan added.

Former European champ Kerry Hope will look to get his career back on track, after his 2012 KO defeat to Darren Barker, when he boxes Birmingham journeyman Max Maxwell.

The show will also be streamed live and free at www.vipboxing.tv