Kevin Mitchell: ‘My determination to become a world champion’


Destiny dawns for Dagenham lightweight Kevin Mitchell on Saturday evening.
A former six time national junior champion and English senior ABA featherweight king whilst still a teenager, it seemed the Cockney with the kayo kick couldn’t miss when, amidst much fanfare,  he signed pro forms with Frank Warren,  as a baby faced 18 year old, back in July 2003.
Nine years and 34 paid gigs later, ‘Mighty’ Mitchell has been beaten just once – a humiliating May 2010 third round stoppage loss to Australia’s Michael Katsidis, when clearly his head was addled by external problems.  The Dagenham Destroyer’ has captured the British and Commonwealth super-featherweight titles plus a couple of Inter-Continental belts, but now has his eye on the big prize.
This Saturday evening, the 27-year-old gets a gilt edged chance to not only redeem himself but also to begin building a lasting legacy when he travels to Glasgow to challenge home hero Ricky Burns for the WBO World Lightweight title. Here, he assures boxing writer Glynn Evans it is not an opportunity he intends to squander.
Burns v Mitchell is live and exclusive on BoxNation (Sky Ch. 437/Virgin Ch. 546).  Join at www.boxnation.com 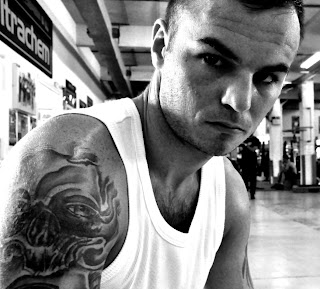 
What did you get out of your tune up against The Dominican Republic’s Felix Lora, who you comprehensively outscored over ten rounds in Bethnal Green last February?

As I was fighting at the York Hall for probably the last time, it was nice to put on a show for my fans while getting a win plus it was good to get some rounds in. That said, I let him off the hook in round ten. He was completely gone but I stepped off him and let him see the finish. He was an honest pro, with a family and he’s got a living to earn. No point me getting him suspended unnecessarily after he’s put a good shift in. Ricky Burns can’t expect such kindness!

While it’s true that you’ve been inconsistent in the past, the grapevine has it that you’re in a very good place mentally right now and have been absolutely flying in training under Jimmy and Mark Tibbs….

That’s true. I’m 27, around my prime so, if I can’t beat the likes of Ricky Burns now, it’ll never happen and I might as well retire.

People keep bringing up the Katsidis defeat and that’s understandable but I was under a lot of stress just then; I’d just split up with me missus.

Bill Ives (head of sponsors Rainham Steel) has really helped me out with so many things and I’ve a lot to thank him for, for sorting my ‘nut’ out.  He took me over to Montana, Canada to ‘flush out’ before I really got stuck into training back here.

There was a big gym for me over there plus I was running in the mountains. Bill helped get me sorted. Right now, I’m having a happy life. I’ve been living really healthily for the past three or four months. I’m dedicating this fight to Bill plus Mitchell Huth, my brave little cousin who passed with cancer recently.

Also, the Tibbses, Mark and Jimmy, have got me set perfect for this. Every fight they prepare me differently, prepare me specifically to the opponent that I’m facing. I’ve been away at a farm in Essex, away from my kids, getting my body and my mind right.

I’ve trained exceptionally hard but also, being away from distractions, I’ve had quality rest and that’s equally important. I’ve had problems in the past but, at the minute, my hands are sweet, no niggles. Right now, they’ve got me feeling like Superman!

You’ve been man enough to concede that Ricky had the better of things when you sparred briefly in the build up to the Murray fight but are you annoyed that the fighters’ code was broken and others went public about what happened between gym walls?

Yeh, very (annoyed). There’s been loads of bullshit about it. Basically, I’d been out of training for a while, having a beer with some of my boys. I’d been back in the gym maybe three days. Fourth day Ricky turns up and, you know me, I’ll spar anyone. Ricky was ‘12 rounds superfit’, as he always is, I was just four days in the gym but I thought I was doing him a favour.

First day I knocked out eight rounds and I did well, especially at the start. One point, I had him flying across the ring from a left hook, something Jimmy (Tibbs) constantly reminds me. Second spar, I could only manage five (rounds) before stepping out.

I know it ain’t been Ricky putting stuff out. He’s an absolute gentleman and my friend. He’d never do anything like that. It’s that Billy Nelson (Burns trainer).  Boxing’s a man’s sport, not for kids and he really needs to grow up.

Saturday night, there’ll be no head guards and no 14 oz gloves. I’ll be vicious and angry!

Are you apprehensive about going up to Glasgow to make your challenge? Do you expect this to be the most hostile environment you’ve encountered as a fighter?

(Laughs) Behave! I couldn’t give shit. I guarantee the Jocks won’t be any more naughty than the Russians I faced when I went over there as a young teenager in the amateurs. I’ve travelled all around the world with the boxing.

I bashed up John Murray in the north-west before his crowd so fighting in Scotland shan’t be an issue at all. After I’ve knocked him out, all the Jocks will be loving me. Just you watch ‘em!

What’s your assessment of Ricky as a fighter? What qualities do you need to be especially wary of?

Ricky’s quality all the way round. He’s quick, has a hard accurate jab, can box and he also punches plenty hard enough to the body. Don’t get me wrong, I’m expecting a very, very hard fight.

So what does Kevin Mitchell possess that Ricky Burns doesn’t? Why do you emerge triumphant?

I’ve got faster hands, more power and better agility. With Mark and Jimmy, we’ve got the tactics sorted for anything Ricky’s mob brings. We know Burns can be hurt. Unlike me, he’s been put on the floor several times.

Also, there’s my determination to become a world champion. That’s something I’ve really wanted since I was a little nine year old baby. Ricky’s already experienced that, I haven’t. My hunger is greater than his.

Unlike going into the Katsidis fight, when I was always likely to get another opportunity if things went tits up, I see this as probably my last chance. To still achieve all the things that I intend to achieve in boxing, it has to happen for me in Glasgow on Saturday night. I’m finally ready to become a superstar that everyone remembers, like my heroes, Barry McGuigan, Chris Eubank and Naseem (Hamed).

My time has come. I’m ready to explode. Watch out for rounds eleven and twelve!

Tickets for the fight are available here.