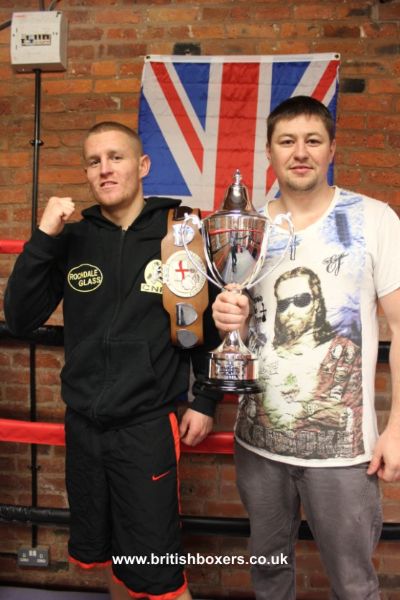 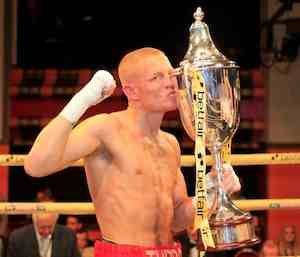 English super-featherweight champion Terry ‘Turbo’ Flanagan couldn’t be kept under the radar any longer and last Saturday night he stepped into the limelight and came out Prizefighter Lightweight champion with his unbeaten record intact and ready to take on the best fighters in his division or at lightweight.

A roofer by day, Flanagan, 23, had defended his English belt against Troy James on September 21st, knowing a potential Prizefighter place awaited him, but he and his coach Steve Maylett didn’t take their mind off that job, outpointing James in one of the best small hall fights of the year over 10 rounds, two weeks later and he was live on Sky as a 12-1 under dog in one of the best Prizefighter line-ups to date.
Flanagan had to overcome a determined Liam Patrick Walsh in his quarter final, which he did on points, before taking on former British champion and favourite Derry Mathews in the Semi. The final was a tight affair against a fired up Gary Sykes, another former British champion and Terry had to dig deep to pull out the win and take home the £32,000 prize money at stake.
Reflecting on the tournament Flanagan says he was confident going in and totally believed he was going to win it; – “I boxed Walsh in the first round and I knew he would come out fast and try put it on, cause I’d sparred Liam in the build-up to my English title defence against Troy James. So I knew that if I stuck to my boxing I would beat him.”
“In the semi against Derry Mathews I thought I boxed alright, Ive also sparred with Derry and was confident going in. People have said that it was cause he had the cuts, but I think I would have beaten him anyway.
“And Sykes in the final, it was a good close fight, again Ive sparred with Gary recently and I was confident of winning, I got two of the three rounds, so I was happy with it.
“I think I surprised a lot of people winning the Prizefighter, but I didn’t surprise myself  because deep down I believed I was gonna win it, people have said; did I really believe that? But I told everyone that and a lot of people won money on it.
“I knew to win Prizefighter it was about skills and winning the rounds rather than just going hundred miles an hour and that’s what I did.

“I feel I’m ready now to step it up, Ive won the English belt and defended it, now this (Prizefighter) so yeah I want big title fight’s now.” added Flanagan.

In fact the smart money was on Flanagan, and friends, family and supporters in Ancoats and Miles Platting, where Terry lives had all had a few bob on their man to do it, so much so, they cleared out the local Bookies who had to close early on Monday morning after running out of money.
The Prizefighter tournament can be a good way to open doors for boxers, some enter as a way back after defeat, or the fresh novice can get an instant spring board such is the format, likened to the FA Cup of boxing. The Matchroom promoted tournament works and is a popular segment of our boxing calenders. But going into the tournament Terry Flanagan risked his English champion status and his 15-0 record, but it was a decision that he and coach Maylett didn’t think twice about taking.
Maylett has coached Flanagan since the amateurs after they used to go to the same gym. Maylett had give up boxing after suffering an injury and was out of the game for a couple of years, when Terry asked him if he would consider training him? Terry was on the verge of quitting the amateur game himself after getting bad decision after bad decision and had had enough of it.

After talking with Steve at a Christmas party in 2006, the pair agreed to work together, but Maylett made it clear that if he was to do it, he would do it 100% and would expect 100% off Terry in everything they did. The plan devised on that night was to win the English, British, Commonwealth and European titles, before chasing the dream of fighting in Las Vegas for a world title.

On New Years day  2007 at 5am in the morning Maylett was knocking on Terry’s door to go out for a run and that is where there journey started. After a couple of seasons in the amateurs, Terry turned pro on January 2009 and the pair have remained on course to fulfil the dreams set out.
October 2012 and that positive mind set and unbreakable belief is starting to manifest into reality. Unbeaten now in 18 fights, Flanagan achieved the first step on the plan by winning the English title in May, not to mention the Prizefighter and know he and Maylett feel it is time to make the next step and fight for the British, European and Commonwealth titles and believe they are ready and are awaiting the call. 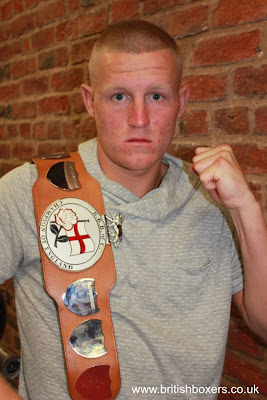 “We want the big fights domestically for Terry now, he’s ready. He’s had his last growth spurt and he is maturing.” said Maylett.

“He is English champion at super-featherweight and now he has stepped up to lightweight and won the Prizefighter, so he is in-between weights, but comfortable at both and we will take whatever opportunities are put to us now.
“Gary Buckland is the British champion at super-featherweight and he defends against Steve Foster in November, so we would be in line to fight the winner of that, but it could be six months down the line before that fight happens.
“Whatever way we go, its got to be a step up from English title level now, he is ready and deserves the chance. Another fight we would take is against the European champion Devis Boschiero, but we will see what offers come our way at super-feather.

“Liam Walsh is
the commonwealth super-featherweight champion and that is a fight we would take and he Terry
would win.

“But with Tez stepping up to lightweight and winning the Prizefighter, we are willing to go down the lightweight route. I believe if Crolla, Mathews or Sykes would have won the Prizefighter they would have gone straight into a fight for the British title with Gavin Rees, so we feel that Terry deserves the same recognition and to be talked about in them same terms so we’ll just wait for Eddie Hearn to come back to us with something.

“Terry is English champion and risked his unbeaten record going into Prizefighter at late notice and he should now reap the rewards because that’s what Prizefighter is suppose to be all about.

“I think over the last year Terry is growing in confidence, he has never took his full potential what he shows in the gym into a fight yet. But he is starting to show it and if he can eventually start taking his form into the fights and believing in himself more, he can go far.

“You haven’t seen the best of Terry yet, but with time and the confidence he has got from winning the English title and now the Prizefighter, he knows he is good enough and he will go on now to bigger and better nights.” added Maylett.

I finished my chat with Terry and Steve by asking them to clear up a couple of questions; firstly had he decided yet what he was going to spend his winnings on and to tell us the correct way to spell his second name? “My name is spelt Flanagan, with an ‘a’ but everyone has been spelling it Flannigan with an ‘i’ and I just never said out, cause I think if I go and try change it, it might be bad luck, if they want to correct it then it’s up to them, but I ain’t sayin out.” laughed Flanagan.

“Haha the money, Ive still not thought what I’m going to spend it on, everyone’s been asking me that. I’ll probably get a new car, cause mines knackered and then get a few bits for me house. But I haven’t got the cheque yet anyway, but Ive been told its in the post.”

“Please can I say a special thank you to my sponsors who have been great with me from the beginning and I hope to take us on to bigger and better things; Sheridan Lift’s, Rochdale Glass and the company I work for Connelly Scaffolding for giving me the time off work and supporting me.

“Also to Steve and all the lads in the gym, especially Rob Lutas (amateur boxer, gym mate) who helped me with sparring, he’s a tough lad and helped replicate the different styles of the boxers, I might have been facing in Prizefighter and it helped me a lot to get sharp and ready for it in the two weeks I had to prepare.”

Pics from the Prizefighter night at the Olympia in Liverpool

A Boxing Bond made in Manchester

Terry Flanagan; ‘No point me boxing on if I lose my English title’