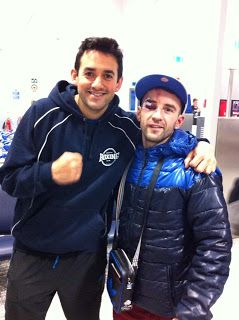 Lee Haskins loses his European title against Jamoye in Belgium

Lee Haskins world title plans will have to be re-written after he lost his European bantamweight title against Belgium’s Stephane Jamoye in Liege on Friday night, putting on hold his world title ambitions.
Haskins, 28, was making the first defence of the title he claimed last July against Stuart Hall, but the Bristol champion was stopped in the eighth round after an explosive encounter at the Hallo Omnisport La Préalle arena in Belgium.
Defending the title in the challengers home was never going to be easy and just getting there was a big mission for Haskin’s, who hates flying but was encouraged to take the short plane journey rather than drive there.
It was Haskins’ first defeat in five years, since he lost against Ian Nappa through injury in 2007
Haskins was expected in the trade to defeat the former champion, who had lost the title to Doncaster’s Jamie McDonnell last year. But fighting in front of his home town crowd, roused Jamoye and the 23-year-old raised his game in a terrific fight that thrilled his fans, by stopping our boy with a vicious body shot to reclaim the title and jump past Haskins in the world title picture.
One win away from a big fight himself, Haskins will have to re-group after losing for the first time in 11 fights. The former British and Commonwealth super-flyweight holder almost took Jamoye out himself in the second round, putting the Liege man on the seat of his pants with a solid left hook, which also opened a cut on the Belgian’s forehead.
Jamoye was hurt but dug in and survived the round and then came back stronger to turn the fight around and in the next session Haskins himself received a awful cut above his right eye.
The referee was looking close at the gash and fearing that he might stop the fight, the champion threw caution to the wind and his tactics went out of the window and he stood and traded with Jamoye in the middle of the ring.
Haskins went down after being caught flush in the fifth, but was up after an eight count and again launched his own sustained assault in the next round that had Jamoye out on his feet only to be saved by the bell.
Credit to Jamoye who got himself together and came firing back in the seventh round dropping Haskins again with a sickening body shot. Haskins got up to fight on and do all he could to hang onto his belt but Jamoye inspired by a rapturous home crowd upped the gears in the eighth round, Haskins went down once again and this time stayed down.
Haskins who has won domestic titles at bantamweight and flyweight in a 29 fight career will hopefully re-group and push on in 2013, he is too much of a quality fighter and a rematch with Jamoye would surely be another cracker. Haskins record is now 26-3, 11KOs.
“I wanna thank everyone for all the support for my fight, it means the world just sorry about the outcome!” Haskins told BritishBoxers today.
“As soon as my eye got cut I couldn’t see out of it, then I thought they were going to stop the fight so my game plan went out the window and I just was looking for the knock-out.
“I don’t know if I’ll box again yet, I will see after Christmas, to my fans I’d like to say I’m sorry I didn’t get the win and bring the belt back to the UK.” added Haskins. Haskins coach Lee Sanigar later spoke to BritishBoxers and gave his view on the fight and Haskins future; “Lee didn’t exactly box to plan the plan, we said that he had to be authoritative from early on because Jamoye might start fast, and not to let them early rounds get away, because fighting away from home you cant afford to rely on the scorecards.

“He got the knockdown in the second, but once he got cut in the third, which was the first time in his career it did throw everything and I think also being away from home and the doctors were looking at it and creating a bit of a fuss and you think are they going to rump us here?

“I think Lee was also hell bent on pleasing the fans too much and show people he can be in exciting fights, but unfortunately that nullifies alot of the natural strength’s that he’s got in his movement and awkwardness at times and his ability not to get hit and that was gone and suddenly he became a bit flat footed and went toe to toe against a very very tough man and unfortunately paid the price.

“”He was at times one or two punches away from stopping him and in the sixth had Jamoye out on his feet but it wasn’t to be.

“Lee’s obviously very disappointed at the but we’ll sit down in the new year, you know were close,Lee’s been in the gym since he was twelve years of age, so we have been together a longtime. We’ll see what Lee thinks, his family think. He has three young children so we’ll asses where Lee is and what his next step will be.

“He was WBC No2 and had aspirations for a world title fight and Jamoye was the inn keeper to that title shot really so we will have to see where we go from here in the new year.

“At the end of the day it’s the fighter that has to put all the hardwork in and do the training and then getting in the ring so it’s down to them, so it will be Lee’s decision ultimately. He’ll have a nice break over Christmas, he is probably sick of the site of us anyway it’s been a long training camp so we’ll sit down and see.

“Sometimes a loss in boxing can open up a few doors, It’s a funny old game like that  and maybe the TV networks here in the UK and the major promoters might consider using Lee. We feel we had been alienated in that sense and I feel it is a sad state of affairs that we had a European champion and no one wanted to broadcast or promote this fight and they missed a trick because it was it was a fight of the year contender and hopefully people will see Haskins in a different light now and see that he is a brave and courageous fighter has well has a cunning and canny one.

“To get to the level he has a European champion and ranked in the world top 10, is a tremendous achievement, were proud of Lee and he should be proud of himself.” added Sanigar.

We look forward to seeing Lee back in the ring in 2013, he is one of the best skilled boxers in the country and can take this fight has another learning curve on his journey to the top.