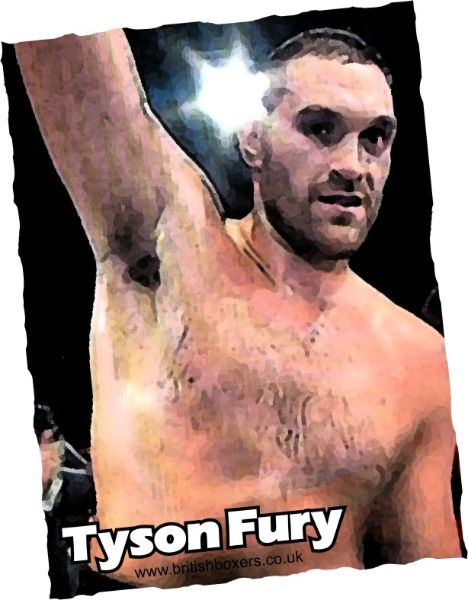 On Saturday night in Belfast, Tyson Fury retained his unbeaten record in winning a wide yet dull points win over a safety-minded Kevin Johnson. Winning by scores of 119-110, 119-108, 119-108, 24-year-old Fury advanced to 20-0(14) and also moved a step closer to a shot at the WBC heavyweight crown currently held by Vitali Klitschko.
33-year-old Johnson, who promised so much beforehand but failed miserably in the delivery department, is now 28-3-1(13).
There was little action to speak of and tonight’s fight had no standout round. Fury boxed well at times, remaining focused and refusing to go wild at any point. Occasionally switching to southpaw, Fury jabbed well when he used his best weapon. Johnson, appearing to have no real ambition other than to hear the final bell, did get home with the odd jab of his own, as well as the even less frequent right hand.
Soon growing tired of the lack of action (and to be fair, Fury has never been in a stinker before tonight, and the lack of action has to be put firmly on Johnson’s wide shoulders), the crowd began booing in the middle rounds and by the 8th the boos were deafening.
Fury was docked a point for hitting on the break in the 7th, allowing Johnson to win a session, but he maintained his composure and seemed content to get his second completed 12-rounder under his belt. Big Tyson complained to his corner that his legs “felt heavy” at one point, but his stamina held up fine – as one would expect when the other guy is barely punching back.
Fury showboated at times, perhaps trying to fire up a disappointed crowd, while Johnson showed skill only in the defensive department. At the end, there was no doubt about who the winner was. Fury won by the same landslide margin as Vitali Klitschko did when he had to cope with the slippery and safety-first Johnson.
Fury must now wait and see what happens in the next WBC heavyweight elimination bout – between Chris Arreola and Bermane Stiverne, set for Jan. 26th – but he remains as convinced as ever that greatness awaits him. Perhaps those fans who tuned in tonight will need further proof.
Still, it would be very interesting to see how the aforementioned David Price would deal with Johnson. Would Price go one better than Fury (and Klitschko) and manage to flatten the man known as “Kingpin?” It’s unlikely we will find out, however, as Johnson is unlikely to be invited back to these shores after the lack of effort he showed at The Odyssey Arena.
And to think, Johnson, in the (quite bizarre) build-up to tonight’s encounter, had the nerve to suggest the fight would be up there with the classic, never to be forgotten Gatti-Ward slugfests!