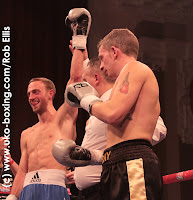 29th January 2013
By Daniel Mole
Dave Egan has set his sights on a title by the end of the year after 2013 started with a bang for the Cannock light welterweight.
The 29 year-old secured a first knock-out, and fourth straight victory, with a stunning one round demolition of Ricky Stock last Friday.
Fighting on the undercard of Frankie Gavin’s successful British welterweight defence against Jason Welborn at Walsall Town Hall, Egan needed just 93 seconds to blow his opponent away.
“I’m really pleased with how things are going and just want to progress,” he told www.uko-boxing.com. “”Hopefully I’ll get six or seven fights in this calendar year, that’s the plan, and, towards the end of this year, winter time, and go for a Masters Title maybe or a Midlands Area Title.
“I’m obviously not at the level of a Frankie Gavin where they can just jump straight into the British picture, skipping half of the levels. Any kind of title would be awesome for me – Masters or Midlands would be great – and then you can build on that. 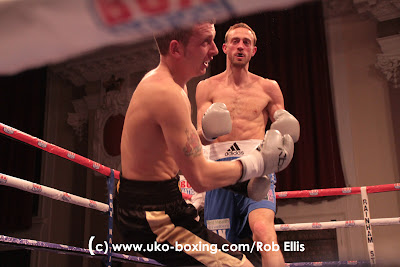 “That’s exactly what Jason Welborn, who put up a great show against Frankie, has done – he won the Midlands title, defended it and then he got a shot at the British title.”
Egan’s performance was eye catching. The speed and ferocity he showed to get his opponent out so quickly will have raised a few eyebrows. However, he had mixed emotions after sending a fellow sportsman to the canvas with such a brutal shot.
“The knockout was a great feeling but horrible at the same time,” he added. “I’d spoken to Ricky before the fight and he came across as a really nice chap.
“Then I knock him out, and it was a proper knockout, he was gone on the floor, that wasn’t the nicest feeling. As soon as you know he’s all right, it’s ok though. All your mates are cheering, so it is such a buzz.”