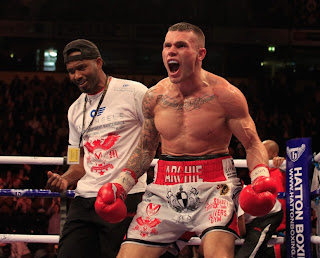 31st January 2013
Martin Murray says he’s going to keep his feet on the ground even if he defeats Sergio Martinez in Argentina this spring.
The St Helens man faces the world’s best middleweight for his WBC crown at the home stadium of Velez Sarsfield on April 27.
Martinez
is widely regarded as one of the top three pound for pound fighters on
the planet, so a victory for Murray would likely catapult him to
superstar status.
However, he has no real interest in glitz and glamour and just wants to secure the financial future of his family.
“There’s stardom to be had, but for me it’s all about providing for my wife and kids,” he said.
“Boxing’s
is my job so it’s not just about looking good, it’s about winning
things so I can make sure my family has the best life I can provide for
them.
“Winning this will make me the number one middleweight in the world and set up some more big opportunities.
“If I go on and beat Martinez I’ll be in some massive fights which will secure our future and my legacy.”
Martinez
is so popular in Argentina that last year he was voted as the country’s
best sportsman ahead of footballing wizard Lionel Messi and around
50,000 fans are expected to turn out for the fight with Murray.
Murray
knows he’s going to be up against it in front of a partisan crowd, but
he believes he has the tools to score an upset which would rival Lloyd
Honeyghan’s surprise 1986 victory over Donald Curry.
“With me being so much of an underdog it’ll be a shock to a lot of people if I win, but it won’t be a shock to me,” he said.
“This is a fight I feel I can win and we’ll be working on a plan in the next few weeks to work out how to beat Martinez.”