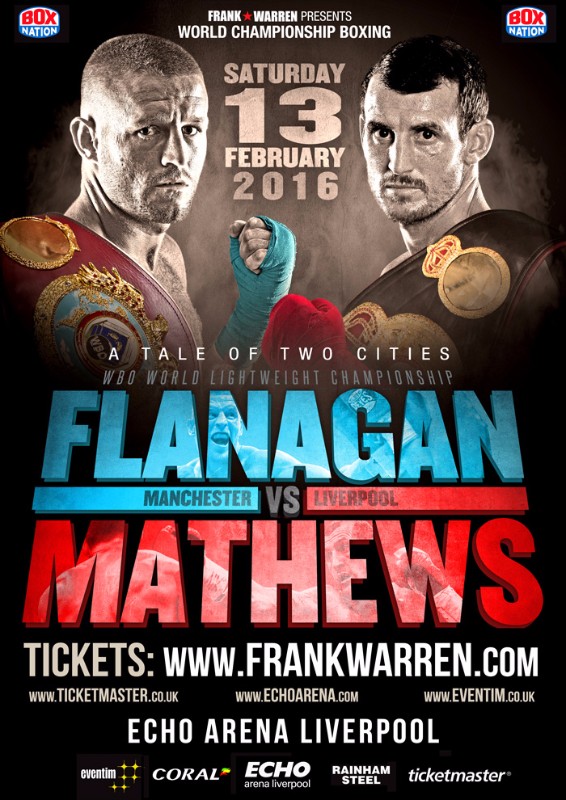 Manchester star Flanagan will make the second defence of the title against Liverpool ace Mathews with plenty of pride and honour at stake plus a bit of revenge thrown in the mix in the potential thriller.

It’s the second red-hot Manchester v Liverpool clash in the space of a few months following hot on the heels of Liam Smith’s WBO World Super-Welterweight title defence against Jimmy Kelly next month in Manchester – the first world title fight between the two cities in 82-years. This time it pits Manchester City hero Flanagan against Anfield favourite Mathews.

Flanagan is in top form and is coming off the back of a devastating performance in October when he smashed his mandatory challenger Diego Magdaleno inside two rounds at the Manchester Arena in a career best performance to claim his position as the world’s top 135lb fighter.

Undefeated in 26 fights, “Turbo” is known for the relentless pace he sets from the first bell and throws powerful combination from his southpaw stance that opponents can’t handle. The 26-year-old from Ancoats aims to make another big statement with a powerful performance.

He said, “It’s a fight he’s wanted and I’ve wanted so now lets get down to business on Saturday 13th February at the Echo Arena and settle who’s the best, which I know will be me. I’m more than confident in winning so I’ve got not problem heading into his backyard and beating him in front of his home fans. I’ve got massive support in Liverpool as well so I’ll have some of the crowd behind me. I’m not writing Mathews off as he’s a good and experienced fighter, he’s held a version of the world title and he’ll rise to the fight against me. Following on from the great win against Magdaleno, I’m looking to make another big statement against Mathews. His style is made for me and I can see myself breaking him down from the start and getting the stoppage.”

Mathews has been gunning for revenge against Flanagan ever since a Prizefighter tournament loss to him in October 2012 and was so intent on facing him that he vacated his Interim WBA World title that he won against Tony Luis in April in order to secure the WBO World title challenge.

“Dirty” Derry is renown for his brand of fighting: all-out war. The 32-year-old has been involved in domestic thrillers against new WBA World Champion Anthony Crolla (twice) and Gavin Rees and believes he will get his revenge in his hometown. And the Kop hero is lifted by Liverpool’s 4-1 thrashing of Man City last Saturday in the Premier League.

He said, “Flanagan is a great champion, but I’ll have to bring his brief reign to an end. It’s a fight that I know I’ll win, it’s not going to be easy, he’s a good fighter, but I know I can beat him. The fire is in my belly for this one and I’m hungry to win and prove that I’m the best. He holds a win over me, but that was just over three rounds, now I’m going to take him deep into the trenches over the twelve rounds and lets see how he reacts when it’s really put on him. I will give him absolute nightmares and my tactics will be spot on to get the stoppage. It’s going to be an electric atmosphere in the Echo Arena and I can’t wait for it. Liverpool are in great form with their win over Man City and I’m going to bring a second world title back to Merseyside. Revenge will be sweet when I win the world title.”

Promoter Frank Warren is thrilled to begin 2016 with this cracking world title showdown between Flanagan and Mathews. He said, “You can’t beat an all-British world title fight for rivalry and passion and Flanagan versus Mathews has it all plus revenge which adds more spice to the fight. Flanagan is the world champion and he showed how ferocious he can be when he destroyed Magdaleno in what was for me one of the best performances by a defending British world champion in many years. He’s going to be up against it with Mathews who’s got the experience to cause Flanagan plenty of problems and he’s certainly fired up for the fight with so much riding on the outcome for the winner and the loser.”

Tickets will go on sale on Monday 30th November with further details to follow.