Tyson Fury: ‘Cunningham is the toughest test of my career’ 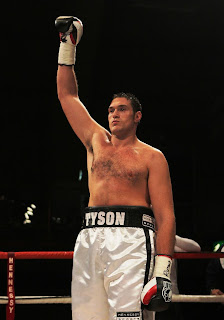 Team Fury’s home-base is far from the home of the massive Mancunian but Lac-Leamy has quickly become Tyson’s second home. The gorgeous facility is open 24 hours a day, seven days a week, offering a premium gaming experience in Canada. On the premises is the stunning Hilton Lac-Leamy Hotel, providing five-star accommodations fit for a boxing superstar such as Fury.
Fury vs. Cunningham headlines an exciting event, co-promoted by Hennessy Sports and Main Events, on Saturday afternoon, April 20, airing live from The Theater at Madison Square Garden in New York City. Their 12-round main event is an official International Boxing Federation (IBF) Heavyweight Voluntary Eliminator for the No. 2 position, pitting No. 8 rated Fury against the No. 12 ranked Cunningham. Also rated No, 4 by the World Boxing Council (WBC) and No. 6 by the World Boxing Organization (WBO).
“I have had training camps all over the world,” the charismatic Fury said, “and so far Casino Lac-Leamy ranks right at the top. I have everything at my disposal here – atmosphere, facilities, and nearby running trails – to get me in the best shape of my career for April 20.”
Already considered one of the best heavyweights in the world, ranked No. 9 by The Ring Magazine, Fury will battle Philadelphia fan-favorite Cunningham with the winner earning a shot at the IBF No. 1 ranked fighter – currently Kubrat Pulev – to become the mandatory challenger to current heavyweight king and future Hall of Famer, Wladimir Klitschko.
“I truly feel I’m ready to conquer the heavyweight division,” the outspoken Fury remarked. “Steve Cunningham is the toughest test of my career, but I’ve made a name for myself by passing those tests again and again. I’ve taken camp to Canada this time in order to make sure that trend continues.”
Fans may tune-in to watch the expected action-packed fight at 4 p.m. ET on NBC as part of a special 2-hour afternoon presentation of NBC Sports Fight Night. This marks only the third time boxing has been on network television in the U.S. since 1993.
Tickets are available to purchase at Ticketmaster outlets and ticketmaster.com
Follow Fury at @Tyson_Fury and Hennessey Sports @HennessySports
For more information on NBC Sports, Lonsdale, Liquid and S3 Media, please visit:
www.nbcsports.msnbc.com
www.Lonsdale.com
www.s3media.co.uk
www.L1quid.com
FOR ALL THE LATEST NEWS VISIT WWW.HENNESSYSPORTS.COM