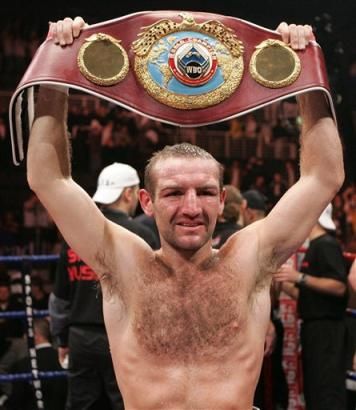 Walsh, who also holds the Commonwealth Super-Featherweight title, is unbeaten in 13 fights and won the WBO European Lightweight crown last July at West Ham United’s Boleyn Ground on the David Haye-Dereck Chisora undercard, halting Italian Domenico Urbano – who had never been stopped before – inside eight rounds.

His up-and-down war against Scotsman Paul Appleby in September 2011- which was the first ever live championship title fight on the revolutionary fight subscription channel BoxNation – was an instant small-hall classic and later won the BBBofC Domestic Fight Of The Year award. The 26-year-old from Cromer is looking forward to facing the first big test of his career.

He said, “Ive got a lot of respect for Scott. I remember watching his fights years ago against Manuel Medina, shouting at the TV and cheering him on. So it seems a little surreal that I’m now gonna to be fighting him. On the other hand, that was years ago and this is a crucial fight for me to win on the way to a world title. I don’t believe he is the same fighter he once was. I’m certainly not overawed by him, I’m young, fresh, and very ambitious, but that makes the fight more appealing. Its a good clash of styles.

“I’m very excited about this fight. It has all the ingredients to be a classic, last time I said this was against Paul Appleby, so if I’m right the fans are in for a treat.”

Harrison, from Cambuslang, a former British and Commonwealth Featherweight Champion, held the WBO World Featherweight title in two reigns making eight defences of the belt. Well document problems kept Harrison out of the ring from 2005 and he made his comeback last year, racking up two wins against Gyorgy Mizsei and Joe Elfidh.

The 35-year-old, who’s records stands at 27 wins, 2 losses, 2 draws and 15 KO’s, aims to become Scotland’s first ever three-time world champion and knows that a win against Walsh will give him a top-ten WBO ranking. “Walsh is a good young fighter, he’s fast and he’s ambitious and this is the fight that will show all the doubters that I’m back and I mean business.” Said Harrison.

“I’ve had two wins since making my comeback and this is the first high profile fight against a young hungry fighter which will test me and show me how far I’m off challenging for a world title. A win will give me an important ranking in the top ten of the WBO so this is must win fight for me.

“I’ve seen Walsh’s fights, he’s got plenty of movement and his heart can’t be questioned after his war against Appleby. I believe that I’ve got the strength and power to win, though, plus the experience at the highest level. I’m on my way back to the world title, it’s going to be a hard road with everything I’ve gone through, but it will be an incredible story when I’ve achieved it.”

Remaining tickets for Rule Britannia can be purchased here www.eventim.co.uk

Rule Britannia is live and exclusive on The Home of Champions BoxNation (Sky Ch. 437/Virgin Ch. 546). Join at www.boxnation.com