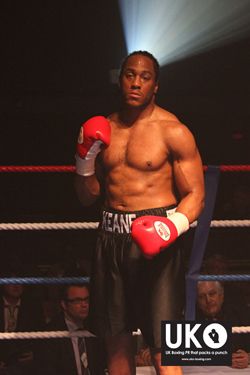 Chris Keane has been given a shot at the WBO International Cruiserweight Title.

The Walsall boxer will face an as yet unnamed opponent for the vacant strap on the undercard of Martin Gethin’s IBF Final Eliminator with Ammeth Diaz at Walsall Town Hall on Friday, 31st May.

Keane has been in explosive form of late, blowing away former British Cruiserweight King, Shane McPhilbin, in January and disposing of previously unbeaten Hungarian brawler, Tamas Toth, last month. Those fights lasted just three and two rounds respectively and, after reaching the ‘ten professional fights’ mark, Keane is now able to fight for the International version of the World Boxing Organisation’s belt.

As well as fighting for the prestigious strap, Keane will earn an International ranking as he looks to build on his impressive 10-0 record.

“It’s a big opportunity for me,” Keane told www.uko-boxing.com. “It’s a chance to prove myself at a higher level, which is good.

“I’m feeling in the best shape of my career. I felt really good against Toth last month. My power and accuracy were there. I’m fighting more regularly too which is helping.”

The 27 year-old former ABA Champion knows that, whoever he is to face on 31st May, will be a step up in class. However, he is confident of proving himself on the International stage and believes the raucous home crowd will help spur him, and indeed fellow hometown hero Gethin, on to victory.

“I just concentrate on getting ready to get in the ring. It’s good to be fighting in Walsall again though. The atmosphere at the Town Hall is electric.”

As well as Gethin and Keane, the undercard on “Ready To Silence The World” features a host of boxing talent.