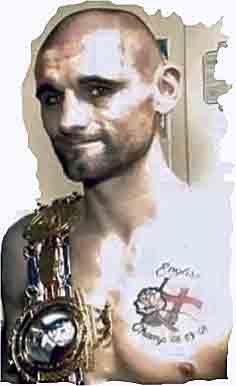 British lightweight champion Martin Gethin is one fight away from a shot at the IBF world title after securing a final eliminator contest against Panama’s Ameth Diaz, which will take place in Gethin’s home town of Walsall at the Town Hall on 31 May.

The winner would be in line to challenge Mexico’s Miguel Vazquez  for his IBF world title.

Gethin, 29, has certainly lived upto his nickname of ‘The Quiet Man’ In the way he has without fuss, re-built his career after suffering three early defeats on the bounce. Four years ago Gethin was the unbeaten holder of the English strap after defeating the unbeaten John Fewkes in September 2008 (KO4) which was his 16th contest.

Riding high and on course for a shot at the British title, Gethin’s unbeaten run was ended when in the first defence of his newly acquired title he lost it to Scott Lawton (KO9) scuppering his Lonsdale belt hopes.

That defeat to Lawton triggered an hatrick of defeats, and within six months he had lost a British title eliminator to John Watson (PTS10) and then dropped an unexpected decision to Chris Long (PTS4) – But Gethin didn’t hang around to dwell on his luck and was back in the ring the following month, looking to kick start his career immediately and get back to winning ways. And that’s exactly what he did, in style.

“There’s one thing I can’t do and that’s give up.”

The Walsall fighter (24-3, 11KOs) went on another winning streak of 9 victories which saw him reclaim the English title against Graeme Higginson (PTS 10) – win the vacant IBF International title, with an 11th round stoppage over Carl Johanneson last September, and in his last fight in January claimed the vacant British lightweight title against Benn Murphy (KO9).

“Taking that Lonsdale belt winning in front of my home crowd was great and then being able to take it home was just unreal.” Gethin told BritishBoxers.

An age old belief in boxing is that when a fighter becomes a champion, they automatically become a better boxer and Gethin agrees, “I think I have become a better fighter yes.”

“Beating Johanneson to win the IBF International and then lifting the British title were key moments in my career, I think I’m getting better each time having the belts and being champion gives you a buzz and I’m confident it will stand me in good stead for the future as I step up to the next level.”

After nine years a pro, Gethin’s patience and determination to get to the top, turn around his career and comeback from those early losses is admirable. The Quiet man’ of British boxing says its a dream come true to be offered this world title eliminator, but in reality he has created his own destiny by never refusing to accept that defeat was the end, learning and coming back a better fighter for them, lesson to all boxers coming through that a loss is never the end.

“There’s one thing I can’t do and that’s give up.” Gethin told us. “When I had them three loses on the bounce it was hard! “And when I comeback it was in the back of my mind. But I got back in the gym and trained harder than ever and I believed in myself. Every opponent I have faced since then I have trained as if there was no tomorrow, I want to make sure I have trained harder than my opponent has.

“My family have also been there for me throughout the low points and all the belief and support they give me keeps me going. I’m one step away from a world title fight It’s a dream come true.”

The man standing in the way of Gethins dream fight for the world title is the big punching Diaz, 29. He has a record of 33wins, with 22 knockouts and 11 defeats. A former world title challenger he is a quality operator and other than two early career losses, Diaz’s other defeats have only come in title fights against world class opposition; the likes of Souleymane M’baye,  Joan Guzman and current IBF champion Miguel Vazquez.

Asked if he had seen anything of Diaz in action and how he would approach this fight, Gethin said; “I’ve got footage of Diaz but I haven’t seen it yet, but for most of my fights I haven’t  really watched any footage of my opponents,I  just find out when I get in there.

“Every fight is a challenge you just have to take every fight as if its your last, I don’t look past the one that’s in front of me all I can do is work hard and do my best.”