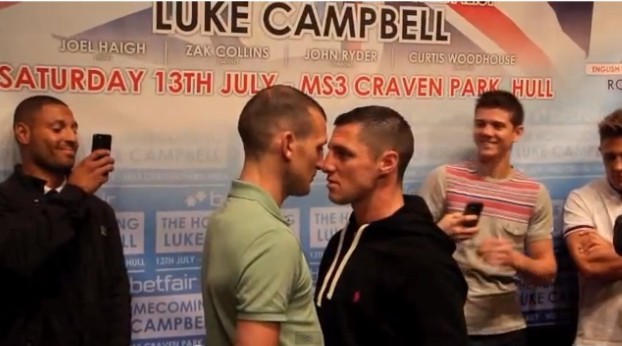 Matchroom Boxing today hosted the Press Conference for ‘The Homecoming’ for the the big boxing event in Hull.

Luke Campbell MBE had invited the people of Hull to watch him perform a public workout at the City’s Queen Victoria Square as he prepares for his hometown debut on July 13 at MS3 Craven Park, the home of Rugby League side Hull KR.

The fight will be shown live on Sky Sports

The former Olympic Gold medal winner and promoter Eddie Hearn were  joined on the top table by the unbeaten Sheffield welterweight star Kell Brook, who stars in a rematch on the show against dangerous American Carson Jones, who gave the Sheffield talent plenty of problems when they met in the Steel City in July.

Barry, featherweight spark Lee Selby the British and Commonwealth featherweight titlist, takes on unbeaten Romanian Viorel Simion, and there are appearances for London’s unbeaten John Ryder, in a warm up before his British and Commonwealth middleweight title challenge against Billy Joe Saunders. English super middleweight champion Rocky Fielding makes a turn, plus the ever exciting ready to fight light-welterweight Curtis Woodhouse will give plenty of entertainment and will face Joe Eldith.

iFilmLondon were up in Hull to bring all the footage from the day.

Please Continue to the Next Page to Watch the Full Press Conference Video.