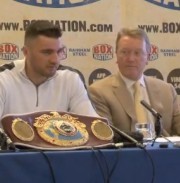 WBO light heavyweight champion Nathan Cleverly returns to action on August 17 when he headlines an action packed show at the Cardiff Motorpoint Arena. The unbeaten Welsh star will make the sixth defense of his title and he will have the added incentive of making a big impression in America as HBO will televise the fight.

Cleverly, 25, hopes that his challenger will be the sledge-hammer hitting Russian sensation Sergey Kovalev who is undefeated in 21 fights, 1 draw, and 19 knockouts – 18 of those coming inside three rounds. Promoter Frank has agreed his side of the deal with HBO for Cleverly to fight Kovalev, but it is now down to Kovalev’s promoter Kathy Duva from Main Events to put pen to paper and sign for the fight with a confirmation either way expected later today.

“It’s fantastic to come back to Cardiff in front of my home fans and defend my title. The atmosphere was electric last time against Karpency and I gave the fans a great show, but it will be even better against Kovalev if he agrees to fight me. I want Kovalev because he’s very dangerous, he can bang and the Americans are excited by him. I want challenges in my career and Kovalev will give me that, I’d be excited to go in against a huge puncher and test my chin and heart. But we’ll see if he fancies his chances or not.”

Warren added, “Everything is done my side with HBO, it’s now down to Kathy Duva and Main Events if they are serious and want Kovalev to fight Cleverly. The date, venue and tickets are all confirmed, so the ball is now in their court and if they are confident in their man’s ability. This is the fight that will make Cleverly’s name against the big-punching Russian, but I see Cleverly’s great chin and fantastic work-rate taking him to victory. It reminds me a lot of Joe Calzaghe’s fight against Jeff Lacy when Lacy was the next big thing in America and was knocking everybody out until he met Calzaghe. We’ll find out later today if he wants the fight.”

The show will also feature Swansea’s big-punching Enzo Maccarinelli who will challenge for a light-heavyweight championship title on the card as builds towards a second world title shot. The former WBO World Cruiserweight Champion has won a British title at light-heavyweight and controversially lost to Ovill McKenzie in a Commonwealth title challenge, but is determined to give it one last shot.

A talent-stacked undercard features some of the best young Welsh prospects including Blackwood super-featherweight Craig Evans; Tonypandy welterweight Lewis Rees and Clydach Vale middleweight Liam Williams. All are unbeaten in under ten fights and will shortly be challenging for their first titles. They represent the next generation of talent that will continue the rich history of Welsh boxing.

Tickets are available now from: Eventim

Continue to the Next Page to Watch Interview with Nathan Cleverly